Micro finance was once held out as the new big idea for rural development and poverty eradication. Helping poor people stand on their own 2 feet. But the model has been widely seen as having flaws and the reason why was clear when I went to visit Hapinoy; a micro finance social enterprise that has got it right.

They work to support " sari-sari" shops ( it means many-many as in a corner shop ). These are very small shops out in rural areas which will provide basic necessities to the local community. They could be as small as a front window or hut.

They realised simply giving even small ( by our standards) sums of money as a loan to people who have never had such larger sums often led to a failure to use it effectively for the growth of the business. So for Erika Tatad, the Director of Hapinoy, they are clear they will only provide a loan if it is coupled with involvement in their training courses. And the genius of what they do is they combine practical skills development like book keeping, with personal leadership skills.

So they are very much committed to the engaged investor model. You don't just give a loan without also accepting responsibility for developing the people and organisation. It's exactly the approach we have in the UK in our Social Investment Business.

They also provide scale with locality. So they use their collective buying power as an organisation to bargain with the big suppliers and companies to obtain discounts they can pass on to their village networks. So they achieve the economy of scale you need to be productive whilst maintaining the local nature of the sari sari shop. They have now even developed a range of products themselves like water and rice which they brand as hapinoy and then the shops sell them. They also encourage the stores to stock things like anti malarial mosi nets and to do some basic community development. They are working on providing a range of basic medicines as well. Good luck to them I say!

It's a remarkable and successful social enterprise that I found very inspiring. 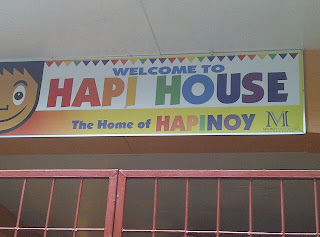 The Hapinoy HQ with their brand logo 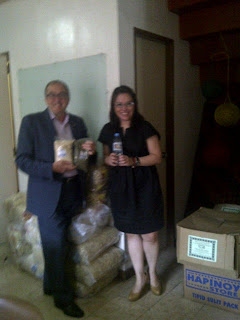 Me and Erika with a Hapinoy bag of Lentils ( so voluntary sector!!! )

I also met up with Rhea Medenilla who runs the Jeepney magazine. This is a street magazine modelled on our very own " Big Issue". Another inspiring story but they face one huge obstacle; its against the law for sellers to sell on the streets or outside shops and transport hubs. So they have to get position to go into offices and cafes to sell. This has really hampered growth.

But its a high class and well produced magazine with brilliant photography and good journalism. They also run the homeless world cup for all the countries that now have street magazines. The teams are made up of the homeless street sellers.

I was dead impressed with Rhea- and that was not just because she said she had been inspired by my talk on Tuesday to start her own Blog! 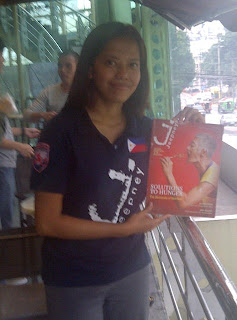 The elegant Rhea with one of the Jeepney issues

And back at home we get a call from Newsnight ; they want me to take part in a debate on the National Citizen Service. Now I've been gasping to be interviewed by Paxman and when the chance comes up I'm here ! But the estimable Dr Kyle did a superb job, making the point a top down, national scheme for all young people is not the answer and you need a diversity of provision, not to mention the irony of huge cuts to the Youth Service at the same time as they want to spend money on this!