Public Services belong to us !

One of those round robin letters in Saturday's Guardian, signed by some 50 people, denouncing the government's open public services White Paper as " privatisation" and deriding the notion of choice.

As always the letter precedes on an assumption that what is best for those who run public services is best for the rest of us: public services belong to the staff not the people. It's what in health we know as the " doctor knows best " syndrome. Shut up and be grateful. What if you can't get a doctor's appointment at the weekend? You surely don't expect them to work weekends do you?

It's an attitude I remember from my time as a Councillor, when housing offices only opened during the staff's working hours ( and closed for 2 hours every monday for " training "! ). But Councils gradually got the message. The public do matter. The users of services do have rights too. Councils started to look at customers and what they wanted.

But we still have far to go. The idea that we as the users and funders of the public services have the right to the best that can be provided is still an alien concept , as evidenced by the continued opposition to reform.

The bedrock of the new White Paper is that citizens have the right to the best service , regardless of who actually provides it. If the service can be delivered better by a third sector body then that is what should happen. And that is ultimately why we need reform. To open up service delivery to a diversity of providers so that people have choice .

Choice is not a dirty word ( except of course for nostalgic Soviet lovers ). And that is why the notion of giving all citizens the " right to choice " as proposed in the White Paper is so correct.

Many of our ACEVO members run organisations that were founded out of a refusal to accept what the state offered. Mental health and disability charities are prime examples of people who took control and power into their own hands and said they would run the services themselves that the State made such a mess off.

So it is not just because I helped launch the new White Paper with the PM that ACEVO is supporting it strongly. I wrote to Cameron recently to express our hope for strong reform.

He replied in equally firm manner saying, “departments will be seeking ACEVO’s views on the new ideas in the White Paper” and “I hope that ACEVO will continue to play an active role in driving the debate and shaping proposals over the coming months”.

We certainly shall. We have a range of round tables coming up for our members to meet with Departments to discuss reform.

And finally the estimable Dr Kyle emails me to say I have appeared in a documentary ! Here is the picture he sent. 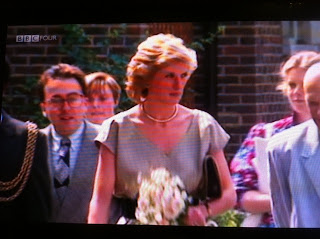 A somewhat younger Bubb. The hair! The glasses! The thinness! But one thing has not changed. My excellent taste in ties. She liked it too!