Social Enterprise in the Philippines!

I'm en route to make a key note speech at the Asian social enterprise conference in Manila,courtesy of the great British Council. A stop over in Hong Kong makes a refreshing interlude.

I was last here at the Handover in '97. A cousin lived here on the Peak and I took part in some of the closing ceremonies. Perhaps the most memorable being the very last Communion service in the Prince of Wales Barracks Chapel. At the end I went with the Priest to a Parish in Kowloon where he presented the Parish Priest there with the Chalice and Patten from the Barracks.

The Barracks now houses the "Peoples" Liberation Army. I hate to think what they have done with the Chapel!

I remember back in '97, the Royal Yacht Britannia, complete with the last Governor General and the PoW ,slipping her moorings and gliding out of the Pearl river into the ocean and an Imperial sunset. My cousin also left and I boarded a plane just after the Red army marched across the frontier. But little has changed it seems. The Hong Kongese carry on as before. Making money. And still with an awkward sense of independence from the mainland. Certainly the HK charity sector flourishes, setting an example to the rest of China.

I went to the main mass at St Johns Cathedral, where services continue much as they have for the last 2 centuries: though we prayed for the President of the People's Republic as opposed to Our Sovereign Lady The Queen. 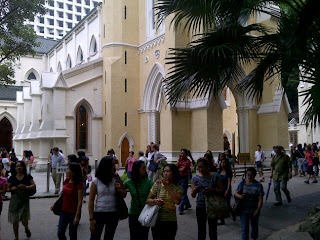 The one rather retrograde change is that the charming rickety old peak tram , which ran from downtown up to the Peak, and which I have used on my previous visits is now merely a tourist curiosity and the tram stop on the mountain top is but a vast and disgusting shopping centre. The magnificent view can now only be seen from the " Sky Terrace " 10 dollars to you sir! " 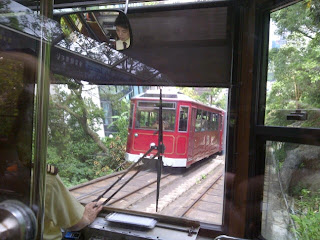 I leave you with the rather gorgeous photo of the sunset taken from my hotel room. Hong Kong is really rather a marvellous place! Look forward to the next blogs on the state of social enterprise in Asia and what they learn from the UK ! The UK is seen as a modal third sector and our relations with Government in promoting social enterprise is regarded as an inspiring example. I am to visit a wide range of social enterprises and meet with key entrepreneurs as well as doing an event for the Ambassador. 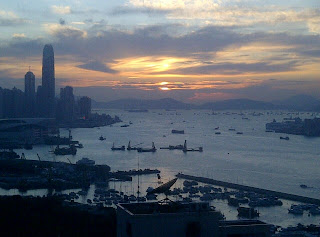 May your TRIBE increase! God bless!