Sugar and spice and all things....

Monday morning: a great meeting with Sir Peter Gershon at Tate and Lyle. He is advising the Government on efficiency savings. In 2004 he was the author of what became known as the Gershon Report, looking at Government commissioning and efficiency. I saw him then and he was convinced that the third sector should play a bigger role in service delivery and wrote that into the Report.

We talked about the ideas behind our "big offer" of cost effective service delivery and how patchy progress has been made on this agenda since his '04 report. Here is a man who certainly gets the point behind the third sector's power to deliver, even if HMT does not. So far to date we have been fobbed off by the Treasury, but I am hoping with the influence of people like Gershon we can make an impact on the three year comprehensive spending review. There is little point in talking about "progressive cuts" if you are not engaging fully with the sector in how services can be delivered better.

London is such a superb City! As I had a few hours to kill before an eye appointment at St Thomas' I decided to walk along the South Bank of the Thames. That meant walking up Clink Street; the site of Britain's earliest prison; built 1127 (I have named my London house "Clinks" as I am behind the Brixton Prison. And as a point of history (I pass this on for Kevin Curley's edification) is that this prison was run by the third sector. It was in the Bishop's Palace and run by the Church. And I even popped into Southwark Cathedral and had 15 minutes of the Organ Recital. An unexpected delight.

But it was soon back to work. A reception at The House of Lords to mark the 50th birthday of the Advisory Centre for Education, run by that most wonderful of CEOs, Simon Hepburn (and an ACEVO Trustee). Set up by Michael Young, its been providing professional and expert advice to parents and carers on a wide range of educational issues since 1960. In this new era of "free schools" its work will be greatly needed.

Then on to a reception to mark the move of the Public Chairs Forum to the Institute of Government in Carlton Gardens. Sir Gus O'Donnell, the Cabinet Secretary was speaking. He began in cheery mode by warning us, apropos the Budget that "if you think its been tough to now, you ain't seen anything yet"!

It was useful to have a word afterwards on "Big Society" and the need to get it grounded. 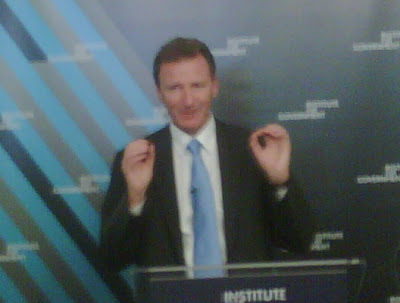 Then it was hot foot across St James' Park to The Atrium for a dinner with some of the MPs who are interested in the work of the Social Investment Business. A good end to the summer solstice! Whether a good start to the day of the cuts budget is another matter.