Appropriate that the feast day of St Alban, our first British Martyr, was used for the cuts budget!

Amusing to be in a meeting in DWP with Phillipa Stroud and then to be rung by David Freud to talk through the welfare cuts announced by Osborne! A hot and uncomfortable day for many!

Philippa was the founding Director of The Centre for Social Justice and is now a special advisor to Iain Duncan Smith. We were discussing how best to make the new Work Programme deliver, especially through the role of great third sector organisations.

David Freud is leading on this and it was good to catch up. Then on to speak to a key official....

On the way to my next engagement I even managed to pop into Westminster Abbey for Choral Evensong. How very special that was!

It was the evening of ACEVO's official reception for new MPs with Nick Hurd MP and me acting as "hosts". Nick gave a good reprise of the Government's general policy to the sector. In many ways, as he said, there is cross party consensus on the sector. Consensus on the role we play and how that should expand and how our campaigning and advocacy role is crucial to a healthy civil society. Clare Tickell, CEO of Action For Children, gave a brilliant response. The news on VAT she said was "not exactly fab", (My Chair tells me the VAT rise will cost RNIB 0.5!) but her main point was that over the lifetime of the coalition some 100,000 children will be born in multiple deprivation and how we, as a society tackle this will be defining of "Big Society" idea.

But the highlight of the day was a dinner for Greg Clark MP at the Carlton Club, laid on by ResPublica and the ubiquitous Phillip Blond. See them here under the steely gaze of one Margaret Thatcher! 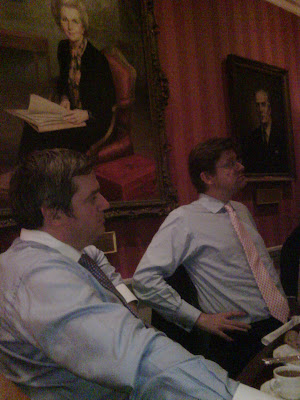 A great discussion. Very flattering to have Greg quoting from my Big Society speech. We agreed that we need a "smart strategic state" at both national and local level. And perhaps because it was St Alban's Day I quoted the famous Papal Encyclical on subsidiarity. The key point of that is that power should reside at the most appropriate level; national, regional or local. Greg had indeed read the Encyclical and agreed with it. A great chat afterwards. Home somewhat late!