Eric Pickles was having an "At Home". All very jolly. All his Ministers with him. Execrable wine; clearly cuts kicking in already. So bad I ditched it for orange juice. But a good chance to earbash on behalf of the third sector. Had an amusing interlude with Phillip Blond of Respublica on the term "civil society" and the superiority of "third sector" as name of choice - that was before we got onto intermediaries as Fascist entities (or not).

Good chat with Greg Clark. He is clearly delighted that he has the "Big Society" brief as part of his Mr Localism agenda. I gave him a copy of The Speech. Indeed I gave one to Eric who pulled out his pen and said "autograph it"! I'm seeing them both shortly to talk on how we can ensure localism is as much about devolution to the third sector as to local councils who keep the power to themselves.

Greg in particular wants to have a word on commissioning and how we can get local government more on the page with good practise vis a vis the sector. Some of the worst practice on FCR and short term contracts happens in local government.

In the morning I was chairing the Admiralty House Group of commissioners government, private and third sectors )which ACEVO and PWC have pulled together. We are having a high level consultative conference on June 29 with top commissioners to talk through potential changes to systems and how we can capitalise the sector to compete at scale. I'm particularly interested in how we can ensure community groups and specialist or niche players do not miss out in any prime contracting models.

David Tyler of Community Matters made a striking and positive contribution to our debate. We are working with the Community Alliance on how we can ensure positive contributions from small and large TSOs. I hate those in our sector who think it's clever to parrot the old 60s refrain of "small is beautiful" to which the only sensible response is "SIZE is better". But that is a juvenile debate.

With Gordon D'Silva that great inventive and witty social entrepreneur - founder of Training for Life and The Hoxton Apprentice. We are cooking up plans for a new network, but I must not be indiscreet. It's funny how many people say to me these days "this is not for the Blog": I guess just one of the penalties of writing the sector's most widely read Blog (that's mine by the way, not Robin Bogg's).

And talking Blogs so good to see that the wonderful new website of the Social Enterprise London; run by one of the sector's greatest Leaders, Allison Ogden Newton, that has a link through to my Blog. Click here.

I think more sector websites should do this. I'll mention to Stuart Etherington next time I see him.

Back in the office I have a meeting with that most brainy guy, John Craig, who runs The Innovation Unit. We talk about radical cuts: or how we persuade Government to use the austerity budget to push different approaches to delivery that save money AND produce better results for clients. There are so many examples of this; innovative third sector leaders are so good at making more out of less. We have been doing it for decades.

And as Seb said, someone had emailed him to comment on my reference to his engagement in my blog, "I guess it's the third sector equivalent of an announcement in The Times". So true.

And to cap off the day I rushed from Eric Pickles to my nephew Julian's 21st birthday party. That's the rowing one, not the poet! See him here. 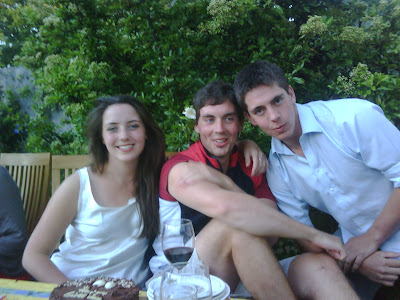 Julian with his brother and sister, Oliver and Miranda 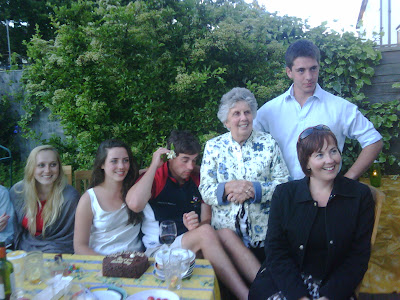 And finally, an amusing Blog from Emma-Jane Cross on my recent Speech. Read it here. So erudite. She runs that great organisation BeatBullying.