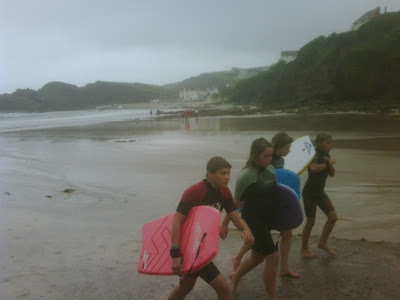 The blistering wind shook the blind and sent the wine glass crashing; it was an early start to a wet and overcast day. Still, at least I was up in time for the early morning bake at the Outer Hope Bakery. But somehow, whatever the weather, this gorgeous part of the South Devon coast looks stunning.
And one is never far from the reach of the third sector; whether that is the local Coastguards, part of the magnificent RNLI, based down by the slipway at Inner Hope, or up on the cliffs overlooking the sweep of coast down to Plymouth which is now in the care of the National Trust, run by the redoubtable ACEVO member Fiona Reynolds.
I see a lot of the cliffs! It's a grand place for the hound to roam and also one of the few places I can get a mobile signal for my Blackberry. Many a call has been made to the sound of a roaring sea and sea gulls screech. Victor Adebowale was most amused when I rang him- he suggested I try not to fall off!
Last night was country dancing in the Square outside the Hope and Anchor so the Bubb clan were out in force, demonstrating their mastery of the twirl and promenade. The hound was somewhat bemused however and barked loudly as I swung my lovely niece Miranda around the Square with gay abandon.
Hopefully later today it will be fine enough to walk across the cliffs to the "Port Light" which sits majestically atop the cliffs at a particularly scenic spot along the coast. One can sip a fine Devon ale, eat a delectable Devon crab sandwich and enjoy the view from Fiona's NT domain. Our annual gathering of the Bubb clan is going swimmingly, though spoilt somewhat by my parents enforced absence after their attack by mad German cyclist. And there are few spots more lovely on God's great earth than Hope Cove, Devon.

I can't quite see Stephen - is that you in the photo in a wet-suit with a boogie-board? From Hector Rule