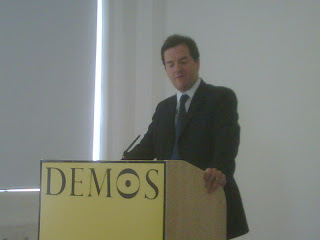 Lunch at Magdalen - a superb restaurant on Tooley St - with an old Oxford friend who runs a communications company and, though I'm sure not connected, is a Tory. So, apart from the usual salacious gossip about people we know we mull over the future under a potential change of Government. All this leading up to a lecture at DEMOS by George Osborne MP, Shadow Chancellor. It was a good speech - stimulating and provocative, though light on detail. He was making the case for progressive conservatism. For example, he argued cuts were necessary but will protect front line services. If so where will the cuts be? (particularly pertinent as he criticised the PM's vague assurances that this is simply about making more efficiency savings.) But I liked the strong and firm assurance that public services will be reformed. He pointed out that Government never talk of more diversity of supply. So obviously I asked him about delivery through the third sector , and whether they will simply let the market decide (so favouring the private sector) or favour the TS. He was very positive in his response and it is clear they do see a much bigger role for our sector. My question was backed up by Martin Kinsella of P3 , an ACEVO member and CEO of an admired and award winning charity in the West Midlands.
I spoke to George afterwards on the same theme and emphasised they need to remove barriers to delivery and ensure intelligent commissioning that enables the real added value of our sector's approach to be recognised. It is an issue that we have firmly lodged with Francis Maude who is handling the implementation side of Tory ideas.
Michael Gove and Philip Hammond were also there and I spoke to both - always essential to be in there pushing the sector's cause. Hammond is coming to speak to some of our top members dinners in September.
ACEVO was there mob handed. My trusty Deputy and Strategy Director backing me up in working the room and Peter twittering as George spoke! Then jumped in a taxi to head back to HQ.
I was meeting a charming woman, Manjinfer Virk, who is a play writer, actress and works in a script company. She is researching the time that Benazir Bhutto spent at Oxford; a time she herself described as the happiest of her life. Benazir always called me "Bubbly" (can't recall why!) And she was known to her friends as "Pinky". Benazir was a good friend; a tremendous personality, generous and loyal, vivacious and superb company when you felt down. I remember a great day out when we both went down to Stratford to watch a play at the RSC in her magnificent yellow MG; a car she also used to help me pick up Michael Foot from the station when he was speaking at the Labour Club (I was the Chair). Indeed when I stood for Chair first time I lost, but got the better deal as Pinky appeared in my rooms in College with a collection of friends and champagne! I promise Manjinfer to look out photos I have of her and me. There is a great one of us on Christ Church Boat House which I used in a tribute piece I wrote for The Indi. 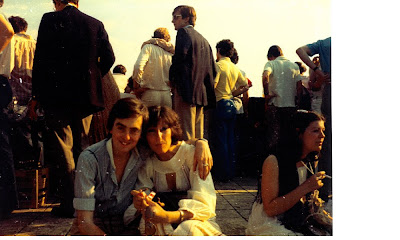 Her untimely and tragic assassination was a shock and I have to say talking it over left me feeling down. But a great person to have known. And more appalling news later when we hear that the wretched and evil regime in Burma has locked up Aung San Suu Kyi again so she cannot stand in the mockery of an election the Generals will be holding. It was good to hear the forthright condemnation of this by the PM.