Back from the gorgeous Georgian City of Bath. Having had lunch with my mentor Paddy Fitzgerald. Paddy has been mentoring me for over 6 years now. An invaluable source of advice and ideas and a listening post. I have always believed having a mentor is crucial to a sector CEO. It is one of the services acevo helps provide for its members. A CEO role can often be a lonely one and having an external support, someone who you can moan to about your problems and outline your ambitions can be invaluable. 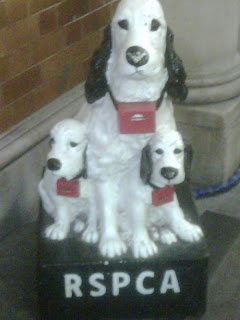 And the lunch of Cornish crab and a superb Chablis helps aid our discussion as we mull over the future and dissect staff. A walk back to the station through the market and I came across the wonderful RSPCA collecting box, as featured. My hound, Sparkles, would have found it amusing I thought!

We had been planning on a fish restaurant in Wells, until we discovered it was the day of the burial of Harry Patch and thousands were expected at Wells. Interestingly the funeral arrangements were partly arranged by ACEVO member, Andrew Larpent, who was the head of the care home were Patch spent his final days. And how impressive that the service marked peace and reconciliation, not military might. And one of the pall bearers was from the German armed forces: a real lesson about the horrors of war. It is marvellous that the last living Briton to serve in the trenches had such clear views of the futility of the WWI.

ACEVO certainly employs talented staff. Let me give you an extract from a local paper about Emma Levett, PA to Seb and Peter.
" CELEBRITIES have helped a resident take on the biggest adventure of her life by signing and decorating baby grows for an exclusive auction.
Emma Levett, from Orpington, is raising money for charity SCOPE before climbing Mount Kilimanjaro, following in the footsteps of nine celebrities who did the hike in March for Comic Relief.
As part of raising the £3,250 for the cerebral palsy charity to do the trip in January next year, Miss Levett, 23, came up with the bright idea of asking celebrities to decorate a baby grow for auction.
So far, fellow Kilimanjaro climbers singer Alesha Dixon and presenter Ben Shepherd, actress Dame Judi Dench and comedian and writer Stephen Fry have returned the signed and decorated baby outfits and presenter, Fearne Cotton, has also agreed to take part in the charity initiative."
And if you want to support her: http://www.kilimanjaroemma.co.uk/ 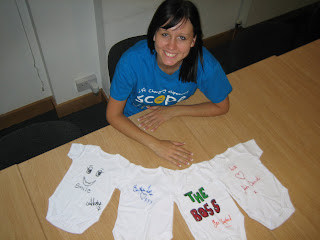