Bed late ( doing Newsnight). Up early ( going to Wigan ). I rather enjoyed the Newsnight gig. A panel discussion on the Chancellor's tax cap on giving; fired up by suggestions from a nameless no 10 spokesperson that there are dodgy charities that rich people are using to avoid paying tax.  As I said on the programme , its a legal requirement that charities must operate for the " public benefit". If No 10 know of some charities that do not do this it is their legal duty to pass those details to the Charity Commission so they can be investigated,  and if found to be operating unlawfully closed down and their assets transferred. 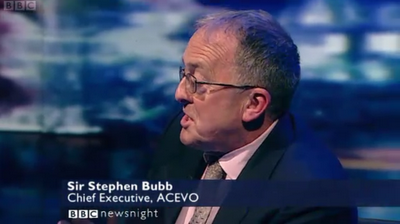 I have written to the Charity Commission to ask them to investigate this as a matter of urgency. Anything that undermines public trust in charities generally is a serious matter and these allegations need to be dealt with. It a serious matter if HMT and No 10 are suggesting there are some tax dodge charities. That clearly is tax evasion and that is illegal. I assume HMRC have some evidence so let's see it and get it sorted.  In the vernacular " Put up, or shut up ".

In the meantime the anger of both philanthropists and charities gathers pace. Was this really what the Government intended?  Is that what they want through the campaign to encourage giving. I'm baffled. What is going on?

So now I'm off to see the Leader of Wigan Council to talk about our Youth Unemployment Commission report. There is much interest in greater Manchester in all this so we are thinking how we engage councils with the third sector on this vital cause.

This is a nice post.
Keep up with the good work!