The horrifying pictures from Haiti and the devastation of the earthquake have moved us all. What I thought brought it really home was that photo of someone tossing a babies body into the burial pit. We should all be generous and donate to the DEC appeal;

Such calamities demonstrate the strength and power of our UK third sector. I am proud to say that there are many ACEVO members amongst the leading NGOs who sprang into action. DEC is a brilliant example of how major charities can work together. It is not just through mergers that we can garner the benefits of partnership.

And DEC is wonderfully led by the great Brendan Gormley, ACEVO member. The ACEVO team wish him and all those involved in the effort to bring aid to those in Hiati well in the coming weeks and months ahead.

Good to see the Prime Minister visiting DEC. Brendan is a neighbour of mine in David Cameron's constituency of West Oxfordshire.

And that leads me neatly into a recent speech of DC. He said,

Apart from the " first sector" reference ( I guess he is unaquainted with the doctrine of the Co-equal Trinity ) he is spot on. I really welcome this outstanding commitment to the role of our sector in service delivery.

What we need to hear is whether Labour support this or not. Once I hoped they were as keen- but the Burnham debacle throws doubt on that. So perhaps time for a major speech from the PM along the same lines. I know he is a great believer in our sector. Let's hear it clearer.

Readers of The Blog will know we have been waiting for a response to the letter to the Chancellor that 260 CEOs wrote on how to make cost effective cuts to public spending through more sector delivery.

I am pleased to say that on Friday afternoon I received a letter from Oliver Letwin who wrote,


"I am writing to say that my colleagues, George Osborne, Francis Maude, Philip Hammond, Nick Hurd and I would very much welcome a high-level summit on these issues – which we regard as central to the delivery of more for less in public services and, hence, as a national priority over coming years.

I hope that I need hardly add that we also believe that the opportunity to apply the principle of payment by results in a wide range of public service delivery through competitive tenders – for example, in relation to our Get Britain Working programme, our Rehabilitation Revolution and in public health – offers the prospect of major improvements in public services and, at the same time, huge prospects for third sector organisations to deliver those improvements."

I replied immediately to accept this offer. We will hold this jointly with our colleagues in ncvo, the Social Enterprise Coalition, the Community Alliance and NAVCA ( Kevin was one of the signatories of the letter).

We are now working with a number of the signatories to the letter on how best to present case studies on what we can achieve. Rather than focusing on the abstract I want to showcase the work that members are already doing in delivering more cost effective serivces and how, with support, we can expand this role.

When I met Oliver he was very interested in the idea of social impact bonds which the Social Investment Business and Social Finance have been investigating. This would be a major way we could bridge the finance gap before payment by results ( which is a key part of tory policy ) are paid.

This is potentially exciting. I have always believed our sector can regain its role as a major provider of community and citizen focused services. We have begun this journey over the last decade. The next decade will , I suspect , see a boom in provision from efficient and ambitious third sector bodies led by a band of dedicated and enterprising Leaders .

And finally, pictures of flooded charlbury. So this is where all that snow went. What was once the River Evenlode is now a lake. More rain and it will be over the bridge as it was some 2 years back. But such calamaties do not eveb begin to register against the disaster unfolding in Haiti. 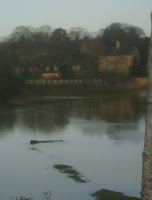 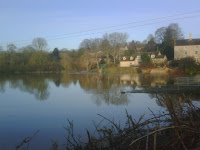