Must be the start of the new decade, but I arrived at work with a mad desire to clear out my office, having already rearranged furniture at home. I attack the bookshelves and desk and have a throw out. It was therapeutic.
And amazing what I found. An interesting document from the days of "acenvo", before I started in this job. In 1987 the Association was set up to represent only national bodies, though wisely members decided the sector's leaders needed support whether they were running a community organisation or a large national charity. So today ACEVO has a large number of CEOs from smaller organisations. Indeed 819 of our members lead third sector bodies with a turnover of less than £1m.
I re-read the strategic plan for 1999: at the start of the last decade. There was a strong desire to develop an "influence on policy" and to "increase the political influence on behalf of members". Well , we have certainly done that in spades!
And now that the Election campaign has begun in a flurry of adjectives, adverbs and attacks, we must ensure the crucial role our sector can play in developing a cohesive society and thriving communities is pushed to the forefront of debate.
But what I also saw from these old documents is how, as ever, leadership development was seen as the core task for ACEVO. As I blogged yesterday, this year we need a strong emphasis on support for the CEO role. It was the key message of my "All Members" email to ACEVO CEOs today.
I suspect, as my friend John Low from CAF says, we will increasingly feel the effects of the recession in this year; giving falling, cuts in public spending and rising demand for services from us. There will also be opportunities for growth and for new ideas and innovation. It's not all doom and gloom.
But this just emphasises again the need for support for the Leader at the top of the organisation.
Now back to the election. Another document I discovered was my speech to the acevo annual conference back some 8 years when we had the then Leader of the Opposition, Ian Duncan-smith speaking to us.
I said then:
"Has the sector realised its strength? We still act like a disparate group of individual organisations happy to be patronised and grateful for private sector handouts or Government contracts. "
Well, to an extent we have moved on from there - it's a mark of how our sector has grown that we are now more central to debates. But we have yet to fully realise that strength we have. So ACEVO's task remains to promote and develop our sector leadership!
And as we are in reflective mode let me reproduce some photos from the recent Bubb gathering to celebrate my Mother's 80th birthday.
My sister Sara's kids did a sketch on the life of Diana Bubb. Here they are; Julian, Miranda and Oliver.

Then this is the wider clan. 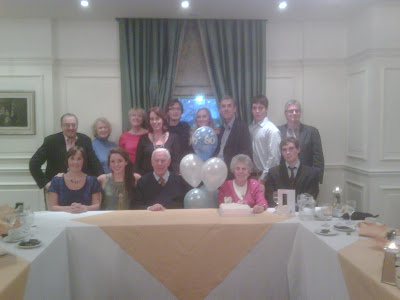 So my mother contemplates a coming decade as I work with members to ensure the continuing rise of the third sector over the Teen decade. 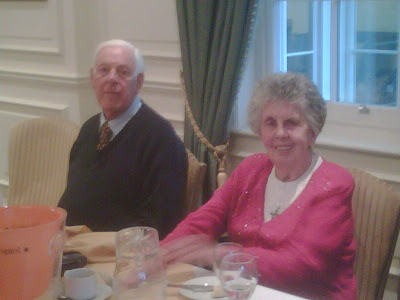