AGMs and Carrying on! 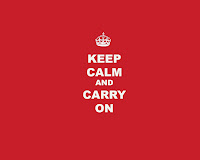 A sinking feeling as I opened the curtains to see a new blanket of snow; admittedly very pretty! Will anyone come to our ACEVO AGM? What idiot decided to put on an AGM in January me thought before remembering...

I get my first apology just minutes later. David Fitzpatrick who says that half an inch of snow in Herts and the transport system has collapsed. He suggests ,

"How about a new ACEVO campaign? - now that Iceland is bankrupt, we invite the 300,000 odd inhabitants to come to run our transport systems?? Bound to be a winner."

But warming to my theme for my AGM speech " Keep Calm and Carry On " I soon rally. I introduce our Impact Report for 2009. See it here.

The year has been dominated by the Recession. ACEVO was, as always , quick off the mark in launching a recession website- which we did for the whole of the sector on the back of a very good financial outturn last year. And we were there to support individual members in trouble- we saw a doubling of people accessing our special one to one advice and legal services. Some members lost their jobs when their organisations folded . The wonderful Civic Trust was one well known example.

The core of ACEVO is the comradeship of the CEO network. We quoted a member in our report who said, no journey is too long in the company of a good companion" so part of our task is to run courses and events and conferences to support members and their leadership development.

We ran a staggering 160 events during the year. Such events and attracted 4500 people. And unlike many other national umbrella bodies, had 75 of these events around the UK and not in London . That is a phenomenal 45 % of the total.

And ACEVO continues to play a leading role in shaping and influencing national policy. Perhaps the greatest triumph was the Future Jobs Fund that was developed by James Purnell MP with ACEVO as a result of work done by my fabulous and 2 brained Head of Policy Ralph Michell. (Pictured here after an interview with Icelandic TV ) 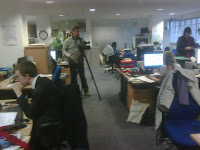 And as a demonstration that you can be both highly independent and work with Governmnet I emphasised our campaign against Burnham's u-turn on commissioning and the purloining of hospital charity assets. 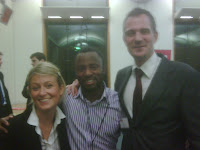 I paid tribute to a great staff team and stunningly talented directors group. We have but 40 staff yet what we achieve for and with our members is tremendous. And as we were at the Commons I also used a qoute from a former radical reforming Tory PM; Benjamin Disraeli , who said

" What we anticipate seldom occurs ; what we least expect generally happens. "

So whatever economists , politicians and pundits are predicting for 2010 let's take it all with a pinch of salt but continue to " Keep Calm and Carry on ".

2 new members of the ACEVO trustee board were announced. Simon Hepburn who runs the Advisory Centre for Education and chairs ACEVO BME special interest group. Srabani Sen is the CEO of Contact a Family. I knew her many years back when we both worked in the AMA !

We also launched our Annual Employee Benefits survey at the annual Parliamentray reception. We do this survey with Foster denovo every year and it gives members great benchmarking information on things like pensions, insurance cover and sickness benefits as well as leave , hours of work and the like. Worryingly the survey reveals that only 47% of members have a strategy in place to cope with the changes that come into force with the 2012 Pensions Act implementation. 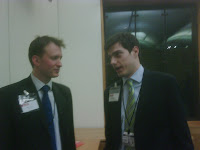 
What was really reassuring was that despite the weather we had over 100 mebers at the Commons. 200 had signed up but given the snow and transport havoc not to have a bigger fall out was grand. CEOs of the big charities, social enterprises, community organisations, 2 dames and a knight...a grerat representation of our marvellous sector. And bearing in mind many sector AGMs hardly attract any people.

And a great sprinkling of grandees and politicians at the Parliamentary reception afterwards. Liam Byrne, chief Secretary at the Trerasury gave a brilliant 5 minute econium to ACEVO. He said not a month goes by without governmnet drawing on work and advice from ACEVO. The new Director of OTS, Rolanda Anderson spoke and even mentioned my Blog! Well well ! 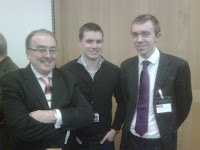 
The weather is playing havoc with my diary: indeed for the last 3 days I have actually had to go out and purchase my own lunch. I am now acquainted with the ACEVO kitchen's microwave, much to staff amusement and irritation as they have to wait for me to prepare my bangers and mash ( yes I know, not good for me, but it is so cold).

And finally, I see NCVO are advertising for a new Chair, someone with superb communication skills...I wonder...

Hi Stephen, it was great t be with you all on Wednesday, I was the caricature artist that Daisy hired in. Everyone was really nice and we had some fun with the drawings! Wishing you and your team a positive and successful 2010 in all you are doing with ACEVO.

Thanks Steve, much appreciated. people enjoyed it and took their caricatures home to frame !!