First- positive news. We have had a response from The Chancellor to our letter from 260 CEOs about how to make cuts that can be positive through a greater sector role in delivery.

It is a strong and positive response, inviting us to submit evidence and asking for a meeting worth some of those who signed the letter. We shall do.

"I welcome the constructive stance your letter sets out in engaging with Government on public sector reform and the tighter spending environment. The Government appreciates the role of the third sector in delivering innovative public services and in recognition of this has committed significant resources through the Office of the Third Sector and other Government departments over the current Comprehensive Spending Review period to increasing the participation of the sector in service delivery.

We intend to strengthen this through recent Government announcements on the Social Impact Bond pilot that will test innovative ways to invest in early intervention programmes, and the development of the Social Investment Wholesale Bank to ensure a greater flow of investment into the third sector.

Further, as you know, the Prime Minister established a Cabinet Committee specifically for the purpose of considering issues relating to the third sector’s involvement in public service delivery, which is chaired by the Chief Secretary to the Treasury. The Committee, which met last week for the first time, provides a forum for Ministers from all the large delivery departments to discuss and seek to resolve the important issues of both barriers to market entry for third sector organisations and the value and wider potential for third sector delivery of public services."

He goes on to say,

"I was interested in the many examples of added value in service delivery by the sector that you outlined in your letter. I would therefore also be grateful if you and your members provide Government with further examples and information to build the evidence base around the third sector’s ability to deliver efficiencies for Government. I look forward to discussing this evidence with you and this will also help inform and direct discussions at the Cabinet Committee.".

Spending a fascinating time at Windsor. A particularly interesting discussion about leadership and whether the current consensus to concentrate on individual leadership traits misses the importance of systems and organisational culture. In other words to get the best leadership in an organisation you must both support and develop individuals (the fish) and the organisation (the fish tank). There is some strength in this. For example is your organisation one where people can work across boundaries, raise concerns and fears without retribution and promote different answers and ideas against the norm. Listening to the Banker later that evening I did wonder the truth in that. It was clear that the culture there did not allow challenge and encouraged risk based on personal reward. We had a brilliant contrasting example from the person who was the Paratroops Commander at Goose Green and his talk on leadership in crisis (The Falklands War no less) and the moral obligations of a leader to people. Although few of us will face that ultimate test there were some important messages about the morality of leadership which would ring a bell with most third sector CEOs. And as our ACEVO members face continuing challenge and as cuts bit and we have to make redundancies, how we do this will be a test for our own leadership. It is an issue I shall be raising with my members as I start the "Big Ask" tour in Manchester tomorrow.

The day ended with Sung Eucharist in the splendid St George's Chapel, sitting in the stalls of the Garter Knights (the plate behind my head was that of Emperor Hirohito). It was the Feast Day of the Conversion of St Paul, "that enterprising bigot" as he was described in the sermon. Later that evening we had a private night-time tour of the Chapel. Amazing when I saw the Long Sword of one of my ancestors (I reckon about my Great Grandfather x 20 ish). A great warrior and Leader, conqueror of the French and the Scots! Is there a leadership gene I wonder?

One of the garter stalls was cordoned off - the stall for the former Governor of the Bank of England, Lord Richardson. His obituary today was affectionately amusing as often these Obits can be. Described as one of the great City Grandees and "an aficionado of lunches and soirees". He was said to be a "man of consensus, but where preferably the last word was his". I like that definition of consensus. I follow it myself (it's a leadership thing you know!).

View from my bedroom 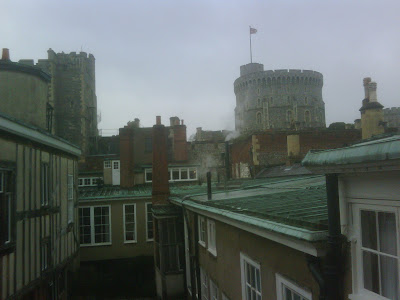 I talked to the Dean of Windsor over dinner. He is my type of Churchman; bemoaning the decline in Anglican standards in the pursuit of relevance. As a signed up member of the Prayer Book Society; and we are talking 1662 obviously, we had an amusing chat about modern day prayer books and the general decline of good English. Just hope he does not read my Blog!