There is something most gratifying about a proper cut and shave. The full works; wax, cut throat razor, threading for the eyebrows and a soothing massage to finish off. Shame you have to come to Turkey for the full works these days. Health and Safety finished all this off in England. I'm feeling particularly healthy after a visit to a Turkish bath yesterday; nothing like been yanked around and pommeled to restore the joints to working order; my masseur assumed I was a Professor as I was so hunched up!

I spent Saturday visiting some of the architectural triumphs of one of the world's greatest architects, Mimar Sinan. There are 2 mosques I particularly like. The Rustem Pasa has a sumptuous interior decorated with 450 year old Iznik tiles. Amusing to note that at the time this mosque was being built my own cottage in the Cotswolds was also being put up; on a slightly less grand scale perhaps. And it was at the same time that after an exchange of letters between the Emperor Suleiman the Magnificent and Queen Elisabeth 1 that the English chaplaincy in Istanbul was established (in 1568). Just outside this Mosque is one of the few remaining "charity stones". After Friday prayers the rich would leave the Mosque and place gifts on this stone. This had to be done anonymously; none of that ostentatious philanthropy of modern day oligarchs. Then the poor would leave and take what they needed; again secretly. Not exactly a charity shop but you get the idea!

The charity theme is replicated at the other great Istanbul mosque, that of Suleiman himself; the Suleymaniye Camil. This is one of Sinan's masterpieces and he is buried nearby. The mosque was surrounded by philanthropic buildings; a hospital, school, restaurant and rooms for the poor and itinerant. You can still eat here in the shaded courtyard though not for free anymore. It’s a favourite eating spot of mine.

On Sunday it was Christ Church, Istanbul for Matins. This Church is G.E. Street Victorian gothic, erected as a Memorial to the Crimean war dead in 1868. Modestly tucked away in a side street on the Asian side.

Then an evening of Ottoman cuisine in a restaurant overlooking the Blue Mosque. A rather generously stuffed aubergine was followed by what appeared on the menu as a typical Ottoman dish; lamb, oven cooked in yogurt and herbs. What appeared was what we call “shepherds pie" if somewhat more herby. And I finished with another Ottoman classic, rice pudding! And tonight I'm at a Turkish cooking class - my brother Nick and his wife are arriving to join us. 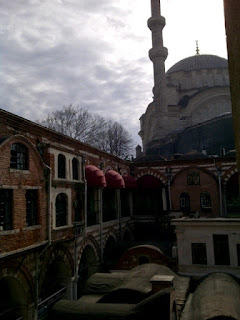