Cash for Communities; planning for disaster.

Always worth seeing what the Scots are up to! I had a Monday morning session with most of the key Directors in the Scottish Government and their boss Peter Housden. I was there to talk about the journey of public service reform in England; I began in 1165 AD but did speed up. But the value of all such discussions is the mutual learning and the session had been carefully crafted so as to highlight some of the reform and change in Scotland.

What particularly struck me was their “Cash Back for Communities" scheme. The government take the proceeds of crime and put them to community use; specifically for young people. It is targeted on the third sector and £50m has gone into sector support at the front line; they estimate 600,000 have been helped and it has utilised over 11,000 youth volunteers. And in the second phase of this scheme it has been run by a third sector body.

Now when the Government in England were looking at using dormant accounts money to fund a social investment bank I argued we should also use the proceeds of crime. At the moment the money recovered from drug barons, big thefts etc. just goes back to the Exchequer. But you can see the logic that Scotland sees of using this money to pay back the community that has been robbed.

So I intend to ensure this idea is fed into the policy making bodies that are preparing for the coming General Election. Indeed as I was having dinner sat next to Nick O'Donughue (CEO of Big Society Capital) at the RBS Business School I mentioned it to him as a great way of expanding capital for the sector. I can see another cause for me to bang on about.

The Scots also have what they describe as an "assets based" approach to public service reform. In other words people are an asset as opposed to a liability and the idea is to capitalise on those assets in communities and with citizens. We had a great debate and some lively exchange on potential from the Grayling rehabilitation reform and health service reallocations (closing hospitals for example!)To fund prevention and integrated care.

But then it was a taxi off to Gogarburn - to the RBS Business School. ACEVO has been involved with our corporate partner RBS in planning a leadership event for the more well established (say older!) Third Sector CEOs. And to look particularly at the development of the business and strategic and scenario planning. Not as so often happens a 3 or 5 year horizon but longer term; to 2025 to be specific. The emphasis of this event was not personal development, though no doubt that happens, but on the way we lead our organisations to grow or contract and to make the key strategic decisions. Too often our sector leadership courses get stuck in talk about our personal styles, strengths and weaknesses and ignore the business need. They are far too “uncommercial" and usually downgrade learning to concentrate on sharing and caring.

We were lucky to have some top class academics; indeed the same ones that teach the RBS directors. Prof Kevin Kaiser from INSEAD led a session on value creation and scenario planning with Dr Franck Schuurmans.

As you can imagine when you have a lively set of charity CEOs there was fun as well as challenge.

The Business School is a marvellous facility; built in the expansionist days of the Bank so it shouts wealth and power. So there is some understandable reticence about it from current RBS people but the upside is they are now using this in a positive way to support third sector leadership. This was the first leadership event but they look set to continue, and given there is so little access to the academic learning that is available to the business community because of cost , then this is a superb way for the Bank to show its reconnection with its customers and the communities they live in. 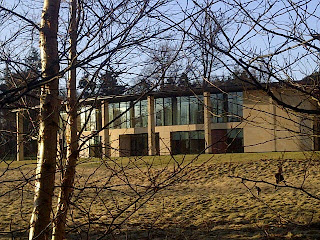 Chris Sullivan, the bank's CEO of Corporate Banking was there and I told him just how valuable this could be. Of course there are still issues with the big banks and reform is needed and overdue (a Community Reinvestment Act is essential- another cause I shall be lobbying for!) but we need strong banks that connect and support economies and communities. They have had a kicking and now need to be back on track. I believe people like Chris, and Hugh Biddell our ACEVO link, can chart that course back. As Chris said they lost that original sense of banking as a service to communities and have lost the trust that went with it. A positive reengagement with our sector is one way they feel they can do this.


Intensive programme. Strong learning. Good teachers. And naturally a bunch of splendid CEOs. I was busy taking notes as a range of my Board members were there also taking notes, not to mention the estimable Ralph Michell sitting next to me smiling wryly at mentions of the foibles and failings of Chief Executives.

﻿
﻿
So a late night journey back to London. My Board meeting today. We are looking at our 3 year strategy!