At Hadleigh Farm , a name that will gladden the hearts of the 45,000 members of that glorious body, The Salvation Army ; notably my friend and long time ACEVO member Debbie Scott , who runs Tomorrows People.

The Salvation Army was formed in 1878 by William Booth. He set out to provide rehabilitation for the poor and jobless. In 1886 he bought land in Hadleigh in Essex , to set up "the Colony " for the benefit of men who through misfortune need a helping hand". It has grown and thrived and they now own over1000 acres and run a rare breed farm ( I bought some of the eggs! ), a training centre and provide employment for people with disabilities. The tea rooms are a great local eating spot where the Bubbs took lunch! 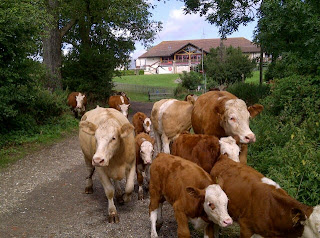 It's a great spot , just close by is Hadleigh Castle , built as I discovered by an ancestor who used it as a defensive spot during the 14 th century and the Hundred years War. Below you will see aged but fit parents enjoying the ancestral spot! 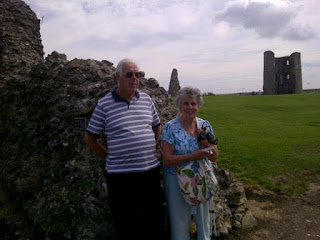 And, of course, as you will no doubt have now clocked , it was the venue for the mountain bike Olympics! All took place over Sally Army land. We saw them dismantling stuff.

And it's worth reflecting more on the role of the Salvation Army. Every night they help about 3500 homeless people, and not just with food and shelter but also starting them back on the road to a better life. They serve over 3 million meals a year. Their prison chaplains reach out to some 79,000 prisoners a year. And in the Olympic aftermath let's remember their children and youth centres and clubs are attended by over 20,000 a year.

Booth's vision of " colonies " that helped unemployed and poor spread throughout the Empire and dominions and so they now work in over120 countries. I saw their work in Australia. They remain true to their mission of working with the homeless and jobless and they are a massive provider of the Government's work programes.

They would have liked to play a bigger role in the UK but weren't able to with the Work Programme. It was interesting reflecting on the origin of the work that Booth did at Hadleigh. He was determined to provide jobs and to get people back on their feet. Not for a profit but because they were driven by a mission. Hence my passion for a greater role for non-profit organisations in the work programme.

One bright spot here is the merger of the Shaw Trust and the Careers Development Group under the dynamic leadership of Roy O'Shaughnessey , also an active ACEVO member. It was one of the early disappointments of the contract for the WP that the Shaw Trust ( then the biggest third sector provider in this area) decided the terms were not right for them to even bid. CDG has however the distinction of being one of the " primes". What we have to hope is that when the new Work Programme contracts are tendered in about 4 years time we will see them wining a bigger role.

We need the third sector's mission driven approach, as animates CDG . One that is guided by the same drive and vision of General Booth all those years back. And if you are wondering where the Hound is , she is holidaying with her Irish cousin Bantry; very happy as you can see with my sister Sara down in Bromley. 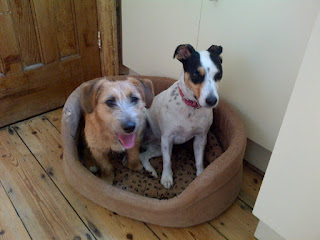