Yes, it's that time of year again. The annual Bubb clan gathering in the quaint old fishing village of Hope Cove, South Devon. 14 of us. Swapping a week of work for family banter and discussion. Decision making is problematic when everyone has a bright idea ( and thinks its the best!) so meal times are fun! The discussion on the best way of making porridge was most stimulating.

Arrived in brilliant sun, which soon gave way to the Great British Bank Holiday rain. The Hound was distinctly unimpressed at the idea of a run over muddy Bolt Tail! 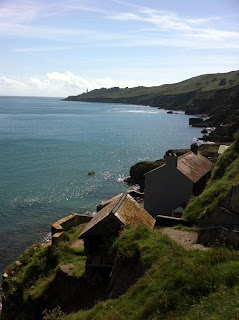 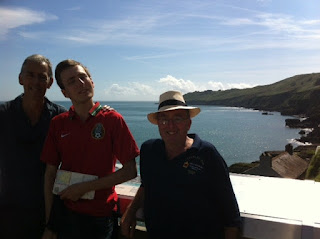 So here are some snap shots of yesterday's run out to Hallsands ; village that fell into the sea; a result of enthusiastic dredging to provide shingle for building Plymouth docks. My nephew Alexander ( currently finishing off his dissertation at Hertford College, Oxford) and brother Nick. 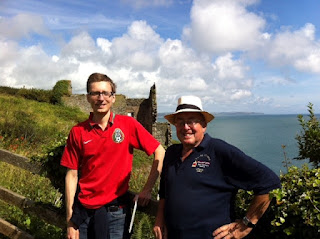 And no walk on the Devon cliffs would be complete without a welcoming ale and goodly lunch at the highly recommended Rabbit Inn at Beesands. The Hound recommends the Fish pie!

Worth mentioning we were walking on cliffs owned by the wonderful National Trust. The NT own a swathe of cliff walks in some of the most glorious of our Devon countryside. Indeed they own much of the coastline in Devon and Cornwall. 3000 hectares of woodland. 1500 hectares of farmland and much of Dartmoor and Exmoor.

We should never take our countryside for granted. Once again we see another attack on our green belt. People quite spuriously linking the need for more house building with doing that on the green belt. We must never give in to avaricious developers for whom a green field is but an opportunity for a car park and faux Georgian carbunkles . 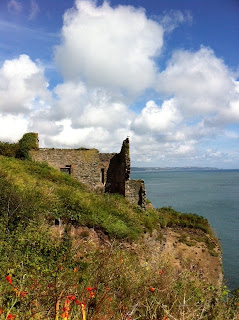 So we must all support the work of the NT and CPRE who will, once again , need to gird their loins to protect our countryside. You would have thought the Coalition would have learnt by now; their proposals on forestry and then the reformed planning laws showed the power of our third sector when we can mobilise the public to protect the country.

We tend to take our glorious countryside and our coasts for granted. But organisations like the National Trust have fought long and hard to protect it.

But never off duty; I get a call from the Office as I wander the beach; the Daily Mirror wants an article on the Honours system. 200 words by 6pm. No problem! Delivered by 5.56 ...