A depressing start to the day. A breakfast roundtable at ACEVO to review the economic consequeences for our sector and its CEOs and public attitudes to beneficaries during recession.

We had a fascinating ( if depressing) talk from the Institute of Fiscal Studies and the consequences of continuing public spending cuts. Treasury should now be plannig the next 3 year spening review but it is now clear they are unable to do so beyond the 2015 election so will simply roll over the last year of the current CSR and start when there is a new Government.

But the trends are clear and the fact we are now in a deep recession have not helped. So a pootential decade of cuts beckons.

What was clear was the consequences for the sector's work as half the entire budget is spent on health and welfare. It will be difficult to make cuts in health which therefore implies major cuts in welfare and elsewhere indeed on one projection its a cut of £44 billion over the period to 2018. And as much of that budget is pensions and allowances for older people there are issues about how far we protect older people and so cut harder for benefits to others , such as disability benefit ( already disgracefully attacked ).

There is also a significant problem for health , even if budget not cut because as medical science progresses nd the population ages demand rises. There will be heavy pressure for radical change to the way we spend on sickness not health and on hospitals not community and individuals. This is of course an opportunity for the sector.

We had agreement that there is no point whinging about cuts if we don't also offer solutions. So how we spend better and more effectively our reduced public spend. Have we been as good as we can in making the case for radical change in delivery of services? ACEVO has been leading this battle and we need to do more.

We also had a presentation from Ipsos Mori. The paradox from their polling is that people generally support the need to cut the deficit but are increasingly concerned at the effects on the most vulnerable.

One of the issues acevo members have raised with us is hardening public attitudes to " scroungers" yet Fiona Weir the CEO of Gingerbread pointed out that when you do more in depth work with people to set out the facts they rapidly see why cuts can be so damaging to social capital.

My Board meeting followed- it's that time of year when we examine our navel- our more particularly our finace and audit results. All fine I'm glad to say. Its always a challenging moment for a CEO when you get your audited accounts. No problems or issues. Good!

I spent the afternoon doing my bit of public duty- I was chairing an interview for a public appointment and as I was in Whitehall I thought I'd try and catch the Torch ( not literally obviously). Dr Kyle and I made our way to Eros to represent ACEVO in welcoming the Torch to Piccadilly Circus!

As a seasoned Londoner I knew how to manoeuvre myself into a prime spot and, as you can see, got a stunning photo of the Torch. No idea who was carrying it. 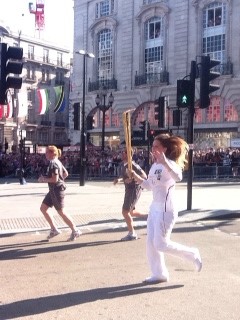