In Sutton I was meeting the CEO Niall Bolger to discuss how we can work with them on developing partnership and consortia work. Acevo has developed a consortia toolkit which is being used now in a number of local authorities.

Then onto Kingston to the HQ of Surrey CC where I was meeting the Chairman of the Council and various directors. I did rather like the Chairman's wood panelled office ( no less than 2 pictures of HM- I approve! ) and Lavinia Sealy was great fun ; clearly engaged by the idea of a bigger role for the voluntary sector. We will be doing work with Surrey. In particular we had a fascinating chat about the potential for the sector delivering in health and how the Council, CCGs and our sector can work together. We also talked about the potential for loans.

A major dash back to London for a reception at HMT to celebrate Big Society Capital ( I'm on the trust board ). Nick Hurd MP engaging on how the idea of social finance is taking root and we had a private word on various matters relating to the Charity Commission. He was also asking about our new office move. He said the joke around was that Stuart and I would have separate lifts. I said yes- and separate champagne bars too! 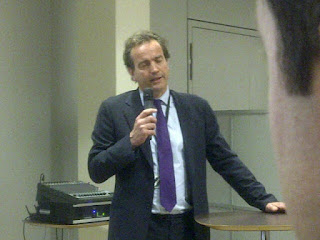 But I didn't dawdle as it was on to Tom Flood's farewell party as he steps down from his CEO role at BTCV (or TCV as we know must call it! ). Tom has done a phenomenal job.  Well known around the sector for his achievement in building an innovative organisation and his great sense of fun. He will carry on his association with acevo as Chair of acevo solutions, our social enterprise arm. The party was at Interbrand. And the quality of the wine and food was at an altogether different level . The way Government hospitality is going I won't be surprised to receive a " bring your own". Still , we are all in it together......and let's face it I'd rather they spent money on the sector than wine ( if only!!! ) Stephen Bubb