Yesterday a day of remeberances. I was in a gorgeous medieval church in Hertfordshire for the funeral of an old Lambeth friend. The burial was in a shady spot nestling into a hillside looking out over the glory of an unspoilt English countryside.

Seemingly, as one gets older the ratio of weddings to funerals inverses.

But a few miles away lies the village where my Irish grandmother married her handsome Royal Marine, met as he passed along the cobbled lanes in Union Hall , Co Cork nearly 100 years ago. Harry carried her off and they were married from my Great Grandparents house in Ashwell. And my Great Aunt Marjorie still lives nearby in Hitchin. We went to visit. She is but 5 months from her 100th birthday. And she was cross I had not come with the Hound of which she is particularly fond!

Listening to " Thought for today" on our national treasure the Today programme ( on which I have been known to appear! ) was a reminder of one of the less remembered values of our third sector; solidarity. The Canon was remarking on seeing all the people from the end of the Moonwalk as she walked her dog early morning. This is an all night marathon run through the streets of London in aid of cancer research. As she commented volunteering is a form of solidarity, whether in an organised charity run or by befriending a lonely and isolated pensioner. And she reminded us that isolation and vulnerability will grow as recession bites harder. A reminder of the growing " Forgotten Britain".

As it happens my sister Lucy, my niece Amy and friend John did the moonwalk. Not sure if they saw the Canon? Or her dog? 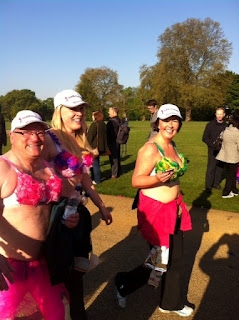 The work of the great charities , big and small, in organising and supporting volunteers is often unsung. Governments think its all about supply and numbers. They forget how much resource goes into management of professional volunteering. I met Catherine Jonstone, the CEO of the Samaritans ( and ACEVO member naturally ) at the Third Sector business awards on Wednesday ( she was an award winner I'm glad to say) . It's a fine example of a charity that organises thousands of volunteers to provide what is often a service that can make the difference between life and death. You can imagine how much time and effort must go into supporting the volunteers who work the phones. Unsung heroes. That means they need money. Indeed if we are to tackle the problem of a forgotten britain we need more volunteers. The befriending service that AgeUK and others offer to the elderly. Yet those are the services that are often the first to go as cuts bite. The more enlightened councils will reshape their services to encourage more third sector support. There are not enough of them!