I've been writing to local council CEOs, along with my colleagues in ncvo and navca, to remind them about the role of the sector and decisions they will make on the 2012-13 budgets. We all know it will be tighter than ever.

I have been getting some interesting responses. One, from Stockton on Tees ;their CEO Neil Schneider tells me they have established an annual investment fund- including a loan element, so that the local third sector can bid for capacity building and sustainability projects. There is also a community fund put into a single endowment to get a higher RoR on investment.

This is exactly the type of work we need to encourage. I was delighted to see the loan project. I talked to Sir Merrick Cockell on this and I wonder if we can encourage more local councils to do this. We are pursuing that and I see the CEO of Barnet council next week who is ahead of the field on these ideas.

Southend on sea said the budget for our sector was one of the few they had agreed they would protect, and in 2011-12 they had made a modest improvement the CEO tells me he has personally been meeting with the CEOs of the local TS organisations.

So not all is bleak on the council front! But just how all the others will react , we shall see! And for the less progressive folk let's rmember the example of Derby council and their folly in not treating ther sector properly.

Sixteen charities have had their grants from Derby City Council extended after challenging the local authority using new statutory guidance.

The extensions were made after Community Action Derby warned council representatives that they had not followed the Communities and Local Government department’s Best Value Statutory Guidance.

Let Councils remember this guidance, introduced in September , says local authorities should consult organisations when planning to decommission services. It was issued after my friend Eric Pickles, declared that councils should not make cuts to their voluntary sector funding that were proportionately larger than cuts to their own budgets.

So I'm naming and praising. And shaming. I'm looking for many more responses of the praise sort. You then get a Bubb badge of approval. And punishment will surely follow those who choose the wicked path. 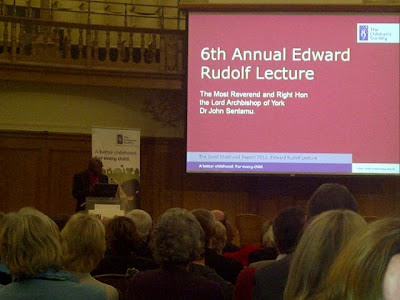 Earlier this week I splent a pleasant day in Oxford. Lunch at Hertford College with my nephew Alexander. Will Hutton is now the Principal there so obviously popped in for a chat. He is enjoying his new incarnation and was keen to tell me how different a style of leadership is required. He is not a Chief Executive but more of a " speaker" type, chairing meetings where the fellows decide in " collegiate" style. No top down orders. Suggestions and prompting.

But I suspect that many charity and social enterprise CEOs have to have a little of that style as well. And I have been known to be collegiate myself though I'm generally more impatient as a CEO and like things done to my desires! Prompting can take just so so long....

Will has been a great thinker and polemisist. He says he is not writing another book but may have a lengthy essay on the way forward as a nation . I suggested something on how Ed M might take a grip to lead! He demured.

But he readily accepted an invite to come and speak at an ACEVO learning with leaders lunch. That will be fun.

Statutory Guidance - that is a phrase that is a sign of the times!