The Work Programme and Windsor Castle!

As I read in Kaye Wiggins' coverage in Third Sector yesterday:

Charities and other groups delivering the Work Programme have signed up to a contract that says they will "not do anything which may attract adverse publicity ".

The terms of the agreement also say prime contractors "shall not make any press announcements or publicise the contract in any way" without approval from DWP.

The adverse publicity clause has been passed to some charity subcontractors through a condition added by some primes that all terms in their own contracts with the DWP also apply to groups in their supply chains.

The contracts between the DWP and the prime contractors also contain a requirement that primes take steps to ensure their subcontractors do not make press announcements or publicise the contract without the department’s approval.

A spokeswoman said the department did not adopt a heavy-handed approach and had not censured charities that had publicly criticised the Work Programme.

Julian Blake, a partner at the law firm Bates Wells & Braithwaite, which specialises in private, public and third sector contracts, said: "Contracts often have a publicity clause, but they don’t always go as far as to say you should not say anything that will produce adverse publicity. This seems like it has gone a bit further, and it does cross the line about what the right balance should be in principle.

I'm pleased to say my ebullient Director of Policy was forthright about all this in his comments .

" Ralph Michell said it was not clear how many charities had been deterred by the clauses in the contract. He said, however, that they should be free to criticise the Work Programme publicly if they thought this was reasonable and in the best interests of their beneficiaries.

"The principle that charities should be able to bite the hand that feeds them is completely sacrosanct," he said. "Whatever is in the contract, charities have a moral duty to speak out on behalf of those they serve."

I'm blogging from Windsor Castle! It's ironic that I'm at consultation at St George's House on " Inequality: moral obligations and economics ". And amusing to report , my bedroom is just next to Brendan Barber of the TUC. How useful . I can give him some helpful late night advice on pensions!

Here is the view from my rather splendid room under the eaves in a room on the ramparts! 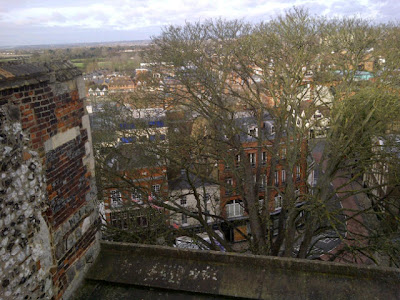 Bubb's Blog praises King George V on 5 January 2012. Bubb is guest of HM at Windsor Castle 9 January 2012. Never let it be said the royal family are slow off the mark!