A suitable subject for reform!

That's our health service. We all saw the reports from the Care Quality Commission about the appalling standards of care for old people in some hospitals. We now have a report from MENCAP which suggests that enduring "institutional discrimination" among doctors and nurses has contributed to the deaths of 74 vulnerable patients.

The 74 patients' deaths over the past decade were either caused or complicated by mistakes in hospitals and decisions by staff who failed to treat them properly and displayed ignorance or indifference to their plight, according to Mencap .

Inquiries by Mencap into the deaths raise searching questions for the NHS, which has been criticised in a series of recent reports for providing poor care, especially to older patients. The parliamentary and health service ombudsman, Ann Abraham, has already ruled that four of the cases highlighted were avoidable deaths and found serious failings in eight others. Inquest verdicts also confirm failings occurred in several cases.

Frankly, only with a radical redirection of resources from acute hospitals into the community can that change can happen. That means a radical programme of hospital closures. And a major investment in third sector delivery.

It is high time the NHS got serious about the sector. There is a lot of lip service paid to more delivery through the sector but the facts show that it is just lip service.

Do you know how much of the NHS commissioning budget is spent by PCTs on the third sector? It's 0.6 %. Yes. That's less than 1%.

When we know that care provided in the community or at home is what often works better and is what people need then this shows just how far the NHS is failing to deliver.

And finally. To cheer you all up on this first week back in the office here are the 2sector knights looking jolly at a recent sector reception. 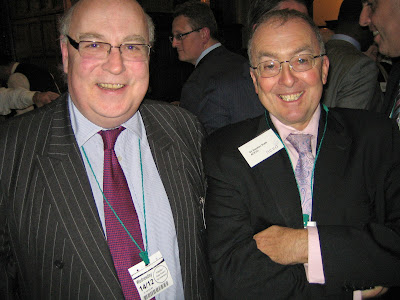 And a thought from my local wine merchants, " Planet of the Grapes" at Holborn,

" January is the month for quality not quantity ".