So I started the day with the Deputy PM and ended it with the PM! As I blogged yesterday Clegg was talking about Scarman. Cameron was at the NHS chief executives annual conference to round off the day after Andrew Lansley had spoken. I had been invited to represent the sector in a sea of NHS CEOs!

Lansley spoke about the importance of the "no decision about me, without me" policy. He said that we should welcome the extension of choice and competition because we need to put patients first. He is right. The NHS is too dominated by a professional approach that assumes we, the "patient" are the passive recipient of health care, rather than a citizen entitled to be advised and consulted on our care. And I know from a brilliant seminar laid on by the Health Foundation (CEO Stephen Thornton is an acevo member) in the recent listening exercise that enabling people to take part in decisions on their care improves health outcomes.

But perhaps the most interesting contribution came from David Nicholson, the NHS chief executive. He had earlier greeted me warmly "competition is not a disease" he declaimed!

He said that he had felt that it was his duty to be the best leader he could be and to pay attention to his own professional development. It was a good point and well made. He talked about a 360 degree appraisal where staff had been asked to comment in a sentence on their overall view of him. "we love you, you evil bastard" was the response!

It's worth reflecting on this; I suspect many third sector CEOs have felt that as times get harder they should set an example and not go on a development course or event. Not go to a conference. This is not a good approach, and it's important to consider how we carry on development that may be less expensive. Not all development is an expensive leadership course.

David Cameron made an appearance at the end of the conference and set out his 3 priorities for the service. Interesting to ask when is a target not a target? When it is a priority! He said waiting times and lists must be brought down. He is right. It should be a target to reduce it!

Think it is a pity he can't drive the choice and competition agenda with more strength. The problem is that the Lib Dems vetoed stronger action. But they should reflect on recent evidence on the value of competition.
David Nicholson 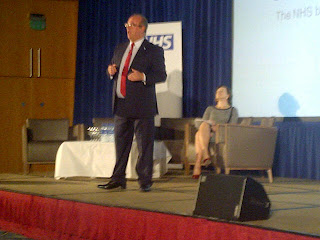 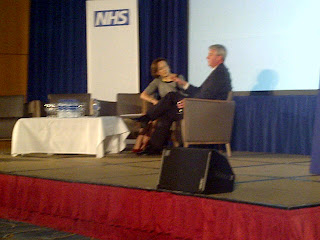 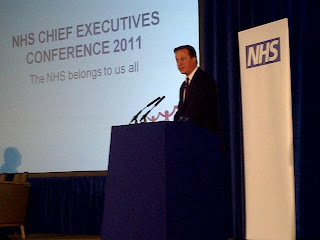 Independent Sector Treatment Centres (or ISTCs, set up under Labour, have been accused of being dangerous and of “cherry-picking” (siphoning off the easiest cases while dumping the complex cases back into the NHS). A serious academic study published in the British Medical Journal blows this out of the water. Compared with patients treated in NHS centres, it finds, patients who had surgery in ISTCs had “better outcomes in terms of severity of symptoms, health related quality of life, and post operative complications”. It found no evidence of "cherry-picking”.

This is a big deal for anyone who prefers evidence to ideology. In 2002, the Department of Health started the procurement of ISTCs in England to reduce waiting times, give patients more choice, and encourage innovative models for the provision of non-emergency services. It was a sensible programme. There are now about 30 ISTCs operating, most of them providing common elective procedures, such as hip and knee replacements, cataract surgery, hernia repair, and so on. Only 2 per cent of elective activity is carried out in the independent sector, a tiny proportion by international standards. The scare stories put out by the various vested interests in the service should take note.

I rounded off the evening by giving a Lecture at the Diawa Japanese Foundation. An event chaired by my old friend Baroness Angela Smith. ACEVO has strong links with what is called the NPO sector in Japan. We helped in the formation of JACEVO, the Japanese third sector leaders body. It was a great evening. I spoke with a member of the lower House of Councillors in Japan, Akiko Kamei . She is a leading member of the People's New Party. We were debating the role of charities and the state in the UK and Japan. I spoke of the dual role of our sector on campaigning and delivering services to our beneficiaries.