Another day. Another meeting in the Cabinet room. Only this time we are presenting our reports to the full Cabinet which today is just on health.

The 5 of us chairs of the Future Forum Review were each given 2 minutes to present. So another sleepless night. I managed to get together my bit in my head at about 4 pm and then got up at 7, wrote it down and went into the garden to rehearse.

I must have made a strange sight in my dressing gown, blackberry stopwatch in hand , declaiming to the strawberries!

We had arrived early to case the joint and prepare ourselves. We joined in the general chat at the beginning over coffee. My old friend Eric Pickles jocularly remarks " well, I always knew we'd end up in the Cabinet together ". I had a good chat with cousin George ( The Chancellor). I explained I was his cousin 5 times removed as he had not previously realised this astonishing fact! My anglo - irish great uncle x4, Osborne Limrick's mother was an Osborne. So we chatted about Ireland.

We were sat at the end of the Cabinet table so I stand to make my 2 minute contribution. So for the record I say;

# competition is not a disease

# evidence in health shows it drives quality and choice

# we propose managed competition that is driven by choice, quality and integration

# despite spin re watering down competition in our recommendations we are not; if you want more choice you need a diversity of providers. You need more delivery through charities , social enterprises and yes, private sector providers.

# the NHS constitution promises choice. It is lamentable in providing it.

# the government were wrong to propose Monitor has a duty to promote competition. That's clunky. What we need is bottom up drive for change based on citizens exerting their right to choice. So;

# a Citizens Panel- watchdog for choice

# and most importantly of all, a legal right to challenge bad delivery and no choice

I end by saying that the NHS Constitution states " the NHS belongs to the people". That's the " people" not the BMA ! That gets a titter of approval from around the table!

And my final plea to the Cabinet; not to be wimpy about competition.

My colleagues Kathy , Julie and Geoff are all remarkably succinct and forceful. We make a great team- different approaches but a powerful voice. Apparently it is very rare indeed for anyone outside of Government to speak at Cabinet. And we are the first people to do so under Cameron.

The questions to us went on for about an hour. Extremely good comments and debate. I suspect I'm not supposed to blog on all that so I shan't. You will be able to read the full debate when they release the Cabinet Papers in 30 years.

All I can say is that as we left the PM said that they would try not to be too wimpish!

Then we the future forum got ourselves into a taxi and took ourselves off to Guys for the press conference to hear the outline of the government's response.

Clegg, Cameron and Lansley , the obligatory collection of nurses to sit patiently behind them to provide a caring backdrop. And us in front row where the TV cameras get endless shots of my bald patch. Did you see it on BBC and ITN last night? Mother certainly did and was most amused...

Cameron actually used 2 of the points I had made at Cabinet so I was clear he had been listening. 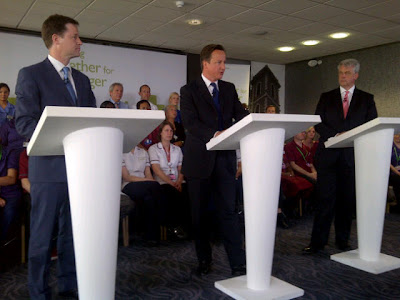 I did a couple of interviews. The first time I have been interviewed by the doyen of reporters BBC's Nick Robinson! And straight after it was onto Milbank where I did an interview with the great Michael Crick of Newsnight.

Next stop ; Parliament where we went to hear the Statement by Andrew Lansley respondent to the Future Forum Reports. Courtesy of the Speaker we were seated in the Distinguished Strangers Gallery! I can't say the debate that followed was exactly a highlight of oratory. Poor points and insults and demands from Labour to apologise. No real attempt to analyse or disect our reports or the Government's response. Disappointing because these changes are important to what we all know is one of the most treasured parts of British life.

A stop off in the Cinnamon Club where the FF attic team were taking advantage of happy hour to celebrate a job well done. Then home. Shattered. I planted a few salvias for relaxation and fell asleep on the sofa.

Where would the sector be without your voice in cabinet telling them they aren't being Thatcherite enough?

Don't be afraid of the private sector .... competition ..... personal budgets .... no wonder Eric, always good for a laugh, was chuckling. Don't be seduced by the glossy black door of No 10, remember that deep inside your heart you're still that surcharged councillor of yesteryear, actually caring for individual people. As Other Pete is saying, what are you doing out-Josephing Sir Keith Joseph?