"Remember that thou art dust....

And unto dust thou shalt return ". The stentorian tones of the Archbishop of Melbourne at the Ash Wednesday Mass in St Paul's Cathedral were a brutal reminder of one's transitory existence. In fact strangely comforting in giving a sense of perspective on life's travails as I have been feeling Lenten. My cold has developed into something more nasty so my tour of the public sector in Footscray continues; from the library to the medical centre.

I phoned and got an immediate appointment. Wonders! Trying the same with our dear Charlbury doctors inevitably ends in failure. I wonder if GP commissioning might herald a more customer centred approach from our Doctors? Anyway a course of antibiotics will fend off the day of dust a tad longer me thinks!

Now I have a Lenten message for the Chancellor as he contemplates the Budget for March 23rd. Letter despatched to him recently about the Community Investment Tax Relief.

The report of the Office of Tax Simplification has the suggestion that the Government should scrap CITR. This wicked proposal must be resisted.

At the heart of the Government's reform plans is enabling third sector organisations to deliver public services.

However, this will not happen without investment. The Government has acknowledged that a "lack of access to capital is still holding social ventures back. It can frustrate investment in key areas such as buildings, equipment, technology and staff training. New social ventures struggle to get going without start-up capital. Social ventures already trading find it difficult to cope with 'lumpy' cash flow without working capital." [Growing the Social Investment Market: A vision and strategy]

Hence there is a crucial role for Government in promoting social investment, as suggested in the Cabinet Office paper and the Government's ambition to make social investment a "third pillar of finance for social ventures, to sit alongside traditional giving and funds from the state.

All this makes it precisely the wrong time to scrap a tax relief aimed at promoting investment in social ventures (CITR). Doing so would not just remove an incentive for social investment, it would send a terrible message to third sector organisations and investors that the Government is not serious about investment into the sector or enabling social sector organisations to deliver public services and build the Big Society.

CITR may well be imperfect, as the OTS report argues, but if the Government is serious about attracting investment into the third sector as part of its Big Society agenda, the answer is to make it work better - not scrap it.

So my Ash Wednesday message to George Osborne is to urge him to resist the tempations of the Office of Tax Simplification and not to scrap CITR. Unless , of course , something better can be devised to promote social investment to replace it .

Given the lamentable failure to reform gift aid,the possible scrapping of gift aid transitional relief and the problems of irrecoverable VAT I would strongly suggest not giving the sector any further kicking. We are doing penance enough.

I rather took to George Osborne MP when he spoke at our ACEVO Tory summit. Indeed I'm vaguely related. He is from an anglo - irish family as I am , and my Great Great Uncle Osborne Limrick's mother was from that distinguished family. But I suspect addressing him as cousin George is a step too far... 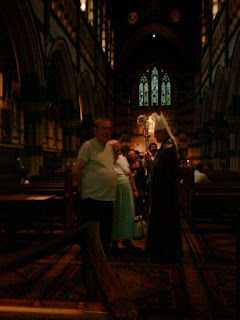 The Archbishop of Melbourne,the Most Revd Dr Philip Freier