It was just one of those things. Supposed to be in Venice for the weekend but partner suffering complications from a gall bladder removal so had to cancel. London instead, and as alternative to moping we went and celebrated at Chez Bruce, South London's top restaurant. Miriam Margoyles was there. That brought back memories; not of Harry Potter though! In 1982 she signed my nomination papers for me to stand for the Council in Clapham Town (the other person signing was that great author Angela Carter!).

Strange to be in London when the PM and President of France were having lunch in one of my favourite pubs, 5 miles up the road through the lovely Wychwood forest from  Charlbury. The swan has a gorgeous position by the river Windrush in the typically charming Cotswolds village of Swinbrook. The pub is owned by the Dowager Duchess of Devonshire - the last remaining Mitford sister. The village Church up the road has the graves of 4 of the other famous sisters, Unity (friend of Adolf), Diana (who married Moseley) Nancy (the author, perhaps best known for the "U and non U" debate and books like "The Pursuit of Love") and Pamela (the farmer). Jessica Mitford was the Red in the family (a member of the American Communist Party) and died in America. She was cremated inexpensively. She wrote that brilliant book about the American funeral racket, "The American way of Death". I went to her Memorial service in London in 1996. A pertinent quote from one of her books is most apposite,

"You may not be able to change the world but at least you can embarrass the guilty".

The PM showed great taste in choosing the Swan. It really is one of the country's most beautiful spots. Go there! 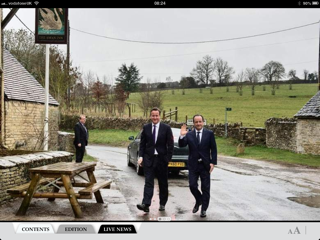 And it being Candlemas I took myself off to All Saints, Margaret St for Evensong and Benediction. A good time for reflection and thinking about a dilemma. I had been asked to talk on the prime 8.10 slot on the Today programme. Not, on this occasion with my ACEVO hat, but as an independent Public Appointments Assessor. It's a role I have been undertaking for some years, where occasionally I chair public appointment interviews and make recommendations to Ministers. People often forget I was an HR Director for 5 years before my current role! The public body appointment process has had some attention over the weekend with comments from Sally Morgan who has been chairing Ofsted. After a lot of reflection, although I was happy to talk about the process and my experience, it had all got too mired in party politics and best to stay out. Unusual for me to turn down a slot on Today, let alone the prime one, but wise counsels prevailed. In fact our public appointments process has great merit which the current row rather overlooks.

C"est la vie. As they now say at The Swan.