Hunt on the NHS


A dramatic headline to the Sunday Times “the NHS must reform or fail". An interview with Jeremy Hunt paints a stark picture. He is right. Ad he is right to give leadership on this issue because unless the NHS faces up to he challenge of shifting resources from hospitals to community and prevention we do risk an end to the underlying principles of a free universal service. Already we see some doctor bodies arguing for a charge to see a GP to meet the financial challenge of finding £30billion over the next decade.

I suspect most professionals in the health service do see that we need to shift resources. However it becomes much more difficult when it comes down to closing hospitals. Political have traditionally shied away from closures but the only way to get resources into prevention and into one community care and integrated care and health services is by closures.

So Hunt is right to highlight these issues. A stark reminder of the problem is the news in today's Times about the rising problems of obesity in the young. Old friend Simon Gillespie, ACEVO member and CEO of the British Heart Foundation was commenting on the survey they have conducted with Oxford University on the eating habits of the young   It makes bleak reading as he says. The majority of kids are not getting their 5 a day and most eat chocolate on a daily basis. So not surprisingly kids are getting obese.

Diabetes is the fastest growing LTC. There are 3.8m people with diabetes in the UK. By 2025 it is estimated this will grow to 5 m. Diabetes care already costs 10% of the NHS budget. In the next 25 years this could rise to 17% unless urgent action is taken. (Stats taken from the ACEVO prevention taskforce report found here)

We urgently need to move more resources into organisations like Diabetes UK, who work with people with diabetes on control of the disease by exercise and healthy eating.

And Jeremy Hunt is right to call for changes in working practices in hospitals and in GP practises to provide more consistent care across the seven day week. So although he has come in for sustained abuse in his year as Secretary of State he must remain on message. This issue ought to transcend party politics   Whoever wins the Election will face the £30b challenge. Only reform will help preserve the core principle of a free universal service.

I'm just back from a weekend in Barnsley. With the “in laws". Yorkshire is a brilliant county and Barnsley, a town that has a reputation for pits and grime actually covers some magnificent countryside. A pub lunch on Saturday looking over towards Nora Batty land. And on the way home we went to Renishaw Hall, the Sitwell’s house. So I end my widely read Blog with a charming photo of the Hound. 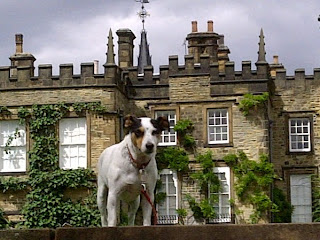 Blubb says "move more resources from hospital to community". If he only worked in a jobbing general hospital he'd see that the pips are squeaking in secondary care and that there's no room to send even a penny more out of secondary care. But of course we COULD go down Blubbs's route. Then he and people rooting for the destruction of the hospital system will have to explain how all the crises in secondary care are dealt with.....6 hour waits on trollies in A/E, the worst cancer survival rates in Europe, Stafford situations, increasing waiting times for virtually all referals and much more. Lets give Stephen Blubb and his supporters the responsibility for sorting all this out on the reduced budget he proposes! The fact is the whole damned NHS is under-funded and switching the positions of the deckchairs wont save the 'Titanic' from going down. Only one thing will....scrap the NHS NOW before we're forced to do it as a crisis response and replace it with a compulsory insurance-based system. Not only will this make users more cognitive of the cost of the service but there will be an unseen bonus of massive proportions....... insurers will set premiums according to the risk. This means that there will be an immediate incentive on individuals to improve their health lifestyles because loaded premiums will crucify the obese, smokers, heavy drinkers and so on. At a stroke an insurance-based health system will cover NHS costs AND make us a more healthy nation. Funnily enough, the Germans, who are no fools, realised this years ago. Stop pretending the NHS can survive Sir Stephen and start suggesting viable alternatives!