My sister Lucy, who was once an NHS manager before she escaped to Deloitte sends me an interesting article which maybe heralds a good way forward for GP commissioning; a GP practice has appointed patients to head up its board .

The Arlesley Medical Centre in Bedfordshire has elected patients as chair and vice chair of the practice as part of its transformation into a not-for-profit social enterprise, which it says will enable it to provide a more tailored service to its local population.

The move has seen the practice evolve into a 'John Lewis' style partnership, with all practice staff handed a stake in the business.

Arlesley is understood to be one of the first individual practices in the country to become a social enterprise, although some larger social enterprises, such as the Harness GP cooperative in Brent, currently run GP practices.

Dr Mike Attias, lead GP at centre, a remote rural practice formerly run by the PCT, said he thought the model, could be a blueprint for other rural practices in the future .

He said: 'Our company chair and vice chairs are patients, which is real people power. Traditionally one would have defaulted to a partnership model. But we wanted to put patients at the very centre.'

He added: 'We will be offering a more varied service. This could be reproducible in small rural communities.'

Dr Attias said the practice hoped to increase its list size from 2,700 to 3,200 by offering a more bespoke service to patients, with extended opening hours and patient involvement that moved beyond 'tokenistic' patient participation groups.

He said: 'We’ve modelled ourselves partly on the John Lewis model in that all employees become members of the company. Everybody has a £1 share of the company.'

And this is not the only example. At the No 10 roundtable last week we heard from another medical practise in Salford which was one of the early " spin outs" and is a thriving social enterprise.


Yesterday was a glorious spring Palm Sunday. I joined the congregation at All Saints Margaret St for the Palm Procession by Oxford st. It gave the tourists something else to gawp at! The Mass was the setting by Rachmaninov, in B , which the organist at All Saints adapted from Rachmaninov's Mass for St John Christyhom. Rachmaninov came to all Saints to hear it sung for the first time and pronounced himself " satisfied". 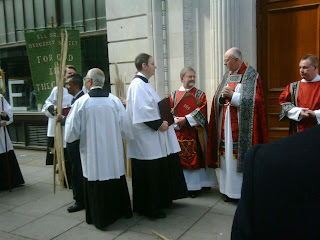 Then in the evening it was off to St Paul's , Knightsbridge for a BBC Radio 3 broadcast of sacred music for Palm sunday. It was being broadcast around Europe so my cough must have been heard by millions!

And finally, as we gear up for The Wedding here are a couple of shop window displays I liked. One in near my local cafe in Herne Hill, the other in Knightsbridge. Guess which is which! 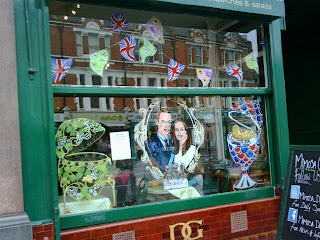 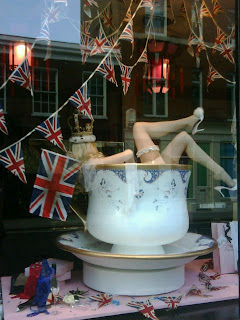