So hotfoot from commenting on and analysing the Osborne Cuts I got to the House of Lords for the reception to mark my decade at ACEVO. Baroness Angela Smith of Basildon was the host and what a superb host she was - why she even took a party of Bubbs and other hangers-on around Parliament. Angela made a great tour guide and then later she made a lovely speech to mark my long tenure in post.

I had got to know Angela well when she was the Third Sector Minister and it was good of her to say how much they had been able to trust me in working with them on plans for the sector, and not even to mention sensitive stuff in my Blog if that was not appropriate. And she clearly likes the Blog! But then, why wouldn't you?

It was a superb do and the speeches were a model; wit and anecdote and suitable praise! I think people really enjoyed the tales of my appointment from first Chair, Geraldine Peacock! She described the marmite effect but said the people I irritate probably need it! She said I had "snog" quality, though not in the sense we usually think of it. It meant, if I remember right, Savvy, Nous, Oomph and Gumption. Lots of mention of famous Blog!

But it was perhaps the Bishop of London who stole the speaking prize. Richard Chartres is a superb orator. He had done his homework on me and was most amusing about the "ubiquitous Bubb".

He was followed by a pairing of two old friends from Oxford days, Damian Green MP, who is Immigration Minister, and Gordon Marsden MP who holds the Shadow brief for Further Education and Skills.

Some lovely moments such as when I introduce my old College friend, the Duke of Buccleuch and Queensberry, to his nephew (by recent marriage) Nick Hurd MP, who then pumped him for info on my dissolute past. Champagne featuring prominently.
And it was good to congratulate Nick on his success with the Transition Fund. In fact there were four other former Third Sector Ministers there.

As you might expect there was much reminiscing. Damian Green MP, reminded us of the "Blue Nun and Flares" days when I was renowned as a Bollinger Bolshevik, though now suggesting I had moved to "vin rouge radical"!

Dame Suzi was pumping my Mother for further info! And I overheard Mother describing how she had brought up her first born according to some book she had bought at a jumble sale!

And then today lots of fantastic notes of thanks. One I really liked was from that great ACEVO member Rob Owen, who runs the St Giles Trust.

It also reinvigorated why I am proud to work in our arena.

Now that made me feel good. No point in being in a post for 10 years if you have not been able to make change happen. And if you can't continue to do that, you had better retire. And I'm not retiring!

You can read my, mercifully short speech to the assembled throng here.

And I can report the event was crowded out. Indeed they had to turn members away and that lead to a major demonstration outside Parliament.

See photo of those turned away here. 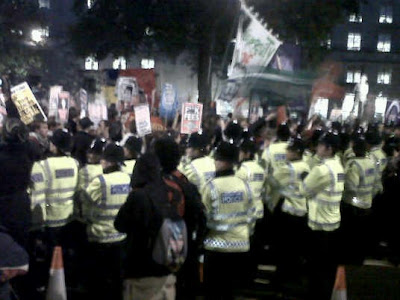