A very interesting presentation from Mona Stolin. She is likely to be the new Swedish PM after their upcoming election. They are campaigning on a joint manifesto which they have agreed with the Green Party. That is not going to happen here eh! Why the Parties here can't even cooperate on how we support our growing elderly population.

Papandreou, PM of Greece, was eloquent on the need for action on climate change! He argued that his country's problems need action with a green economic agenda. 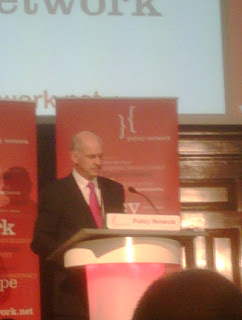 Jens Stoltenberg, PM of Norway, argued that the crisis of unemployment needed to be tackled now but that there was also the need for a strategy for growth and new jobs. The market cannot regulate itself and it essential we develop new global financial architecture. 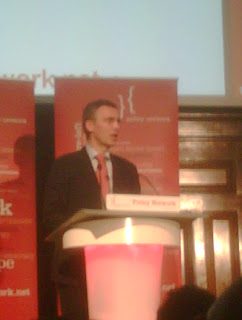 The splendidly named Jose Luis Rodriguez Zapatero is PM of Spain and was the only speaker who did not deliver his speech in English ... and the hand gestures were exotic. He was the first to talk of the importance of ideas; speaking of balance, harmony and equal opportunities as underpinning the response Governments must make to global crisis! 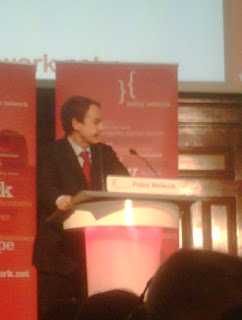 And then finally it was Gordon again. A really very engaging speech - despite that rather gloomy external image he came across in a warm and welcoming way. And a good intellectual speech - he spoke without notes this time, as opposed to the scripted one this morning. And you could see the conviction in what he was saying; particularly on international aid and development. It's an image more people should see.

He quoted Keynes saying you can fail conventionally or succeed unconventionally. A rather splendid thought for us as Leaders of the third sector.


You will not be astonished to hear I asked a question. Surprise surprise there! I asked our PMs collective what role they saw for civil society organisations? And Mandelson picked up my question and asked Zapareto what role we should play. He said we need to tell markets they must adjust to new structures; I was a bit at a loss on that answer...

However Gordon did pick the point up. He said Governments must accept change and accept that services should be more personal, shaped by citizens. We have to restructure Government Departments and budgets. He argued that public services must be reformed. He argued things that we should not be doing by Government itself, or not doing well, should be done by others. But that does not mean the State retreats.

It was a very ACEVO answer. I led the clapping for that.