Always good to be in Edinburgh - one of the world's great cities and its wasn't raining....

Here for a joint ACEVO/ACOSVO meeting to discuss the future of our sector and cross border relations. ACOSVO - The Chief Officers of the Scottish Voluntary sSctor - is our sister organisation here, and I have been working with the redoubtable Pat Armstong, their CEO,  over the last decade in building partnership. We had a pleasant dinner and chat about future joint work - particularly how we can mobilise SNP MPs on issues that affect our third sector generally .

The context of the referendum and the election have given added spice to the discussion with a range of the leaders of cross border charities operating in Scotland.  There are over 900 registered with the Scottish regulator OSCR and although they form only 4% of the total registration in Scotland they account for some 80% of turnover.  So we had people in the room from well known charity brands like Oxfam and Crisis. And I was joined by 2 of my trustees Kate Welch and Kate Mcdonald, so we could outline some of the plans ACEVO has in its " Big Conversation" consultation.

An invigorating discussion.  We touched on recent travails on pay and fundraising with the general view that we should keep all this in proportion.  Its not a crisis but it is something we must watch. The Scotland Director of the Institute of Fundraising was there and I had a good chat afterwards about how we respond.

Some interesting reflections on a warmer climate for charity in Scotland and a better approach from Government and indeed their regulator.  Though one member did warn that the SNP is an unforgiving beast and you cross them at their peril.

We had a good discussion on campaigning - a strong view as you would expect that this lies at the heart of charity and must be protected.  Fortunately in Scotland the regulator is not about to "review" this and there is the intriguing prospect that if your charity is headquarted in Scotland you have to register with OSCR but not the E+W Charity Commission.  Perhaps if we get CC charging and a repressive approach on CC9, UK charities might switch their HQ! As ACEVO is a WISE charity (members in Wales, NI, Scotland and England) that's tempting.  Edinburgh's such a cool place to live (in both senses obviously).  Not that we have such plans....Obviously.

There was one member who said there was no doubt that their campaigning role had been down played in the recent election as a result of fears about the Lobbying Act !

Just a few hours before heading off on the tram to the airport - I'm going to check out some of the sights I've not seen before, including the museum on the Mound, in the grand Bank of Scotland premises.  On the way spotted the Macmillan cancer van in a prominent position outside the Scottish Royal academy.  Great to see that ACEVO member and former Macmillan CEO Ciaran Devane was made a knight in the Birthday Honours ( indeed were a number of ACEVO members were honoured - like my vice chair Sharon Allen, David Bull from Unicef and Jeremy Hughes of Alzheimers). 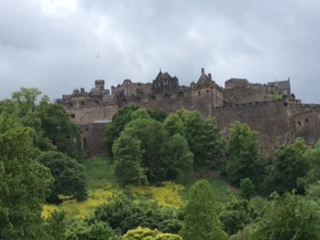 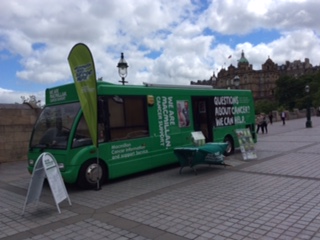