At the heart of trendy Clerkenwell stands the ancient gateway of the Priory of St John. It may be cool now but in Dickens day this was a den of depravity.  The Priory has gone, falling foul of Thomas Cromwell, and the lovely church bombed in the Nazi Blitz. But it is still the home of St John's Ambulance and I was there to see Sue Killen, the CEO and ACEVO member. Great to get a tour of the old parts of the Priory still standing.  The photos show the place off so well and if you fancy getting married in a rather splendid environment - it's available for hire! 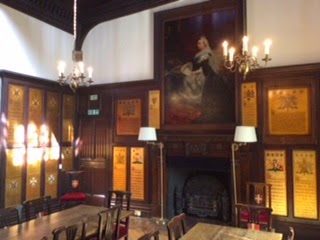 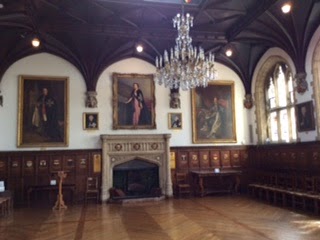 One of the great joys of my job is visiting charities - old and new.  Vibrant new social enterprises (I'm on my way to the launch of " Future Directions" in Oldham today), household names and community groups and ancient institutions that have been with us for centuries.

St John's Ambulance is a much loved national institution.  All football fans know of their vital work in enabling matches to be played.  Less well known is the work they do in the NHS in areas where they provide help in assisting 999 calls.  A growing role - they have an increasing role in commissioned delivery for the NHS as well as their core role in first aid.

And all institutions need change.  Sue Killen, their CEO has been there 7 years overseeing a strong change management programme.  Not always easy she says but vital to modernise a service that is as relevant to the 21st century as it was in the 19th.  She has had to turn around loss making activities and secure break even. And she is a striking example of someone who left one of the most senior posts in the civil service to join the third sector.  A move she does not regret!

The work they do is a reminder of the power of charities to harness the skills of paid professional staff with the drive and commitment of trained volunteers.  But volunteers need to be trained to the highest standards and that is not cost free, nor does it come without significant management and supervision.  So many governments have had volunteering initiatives that focus on getting more people to volunteer but forget this is not cost free for charities.  And let's face it, these days there are many issues around effective safeguarding and other controls because as with many members they face not simply regulation from the Charity Commission but from the CQC amongst others.

You can go and visit as there is a museum at the gateway that contains some fascinating artifacts and documents showcasing the fascinating history of St John's Priory and the Ambulance service.

Yet another example of the power of the third sector to do good.  Maybe we might hear a bit about this in the coming election campaign.  We have heard zilch so far.