The Party Conference season has begun and I'm in Glasgow at the Lib Dems. It’s not just a good time to seek out opportunities to influence the decision makers but there are plenty of ACEVO members here promoting the charity and social enterprise cause.

The Charities Aid Foundation always has a great presence at these Conferences, with a stand and fringe events. And they often use the occasion to launch a report. As they have today. It’s worth reading.
Nine per cent of people in the UK account for 66 per cent of all the time and money donated to charities, according to research CAF have provided in a report " Britain’s Civic Core: Who are the People Powering Britain’s Charities?"

It is based on a survey of 2,027 UK adults between 31 July and 1 August 2013 that asked respondents about their attitudes towards and involvement with charities and social causes. People were asked how much they donated to charity and how much time they volunteered. The research found that 24 per cent of people in the UK do little or nothing for charity – the "zero givers". The 9 per cent who are responsible for two-thirds of the UK’s charitable activity are classified as the "civic core".  The other 67 per cent of people in the UK, who account for the remaining 34 per cent of charitable activity, are labelled the "middle ground".

People in the civic core would give a minimum of £352 in donations and a minimum of 63 hours a year to charity.

It shows the scope for action to encourage more giving and to support charities capacity to expand volunteering. The government's recent proposals on payroll giving are a good move on this.

I'm just blogging after a great speech from Vince Cable; for me a man of integrity and good sense. Last night a fascinating fringe with the Social Market Foundation and Jo Johnson MP, Danny Alexander and Frances O'Grady of the TUC. 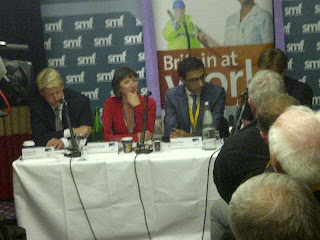