The outrage! As I lay prone on the operating table the anaesthetist leans over and asks:
" Are you retired? "
"RETIRED! HARDLY " I reply as majestically as is possible in one of those flimsy NHS gowns, fixing him with my beady eye. But there the conversation ends as the liquid sleep took its effect.
And the last friendly words of the Nurse were a Firm "NO Alcohol". I'm afraid I always get a violent Pavlovian reaction at this. I start thinking of a cool glass of champagne, lovely bubbles pouring down the frosted side in an enticing and irresistible way. But I was a good boy and resisted!
The Op appears to have gone well , though I had to return for a stitch to be removed the next day.
I see Andy Burnham waits until l'm on the slab before announcing his "NHS First" paper. Surely its " Patients First", not the institution? But I'm afraid that's where his NHS as preferred supplier has driven us. You cannot put patients first if you have decided that third sector provision is not preferred even if it is more cost effective and client driven. And how will you secure a more productive service and one able to control cost if you refuse to allow competition on equal terms? This absurd policy will be challenged. You can be sure we are already well advanced in our plans to get this overturned. Good to hear that at a dinner last week Francis Maude MP was clear the Tories will be consigning the Burnham u-turn to the hospital incinerators. Incidentally at same dinner he promised £300 m for a Social Investment Bank. Sound man that Maude.
St Thomas' is a great Hospital. Since I became a Health Authority member there in 1982 I have had strong connections over the last three decades in various guises, more recently on the Foundation Council. I always think it is reassuring that whilst an NHS hospital for 60 years it was run and managed as a third sector hospital for 400 years. Before 1947 there were 1000 charity hospitals, big and small. Indeed most of our best and well known teaching hospitals like Guys and Tommies were such. They live on in the many hospital charity Foundations: ACEVO has many of their CEOs as members.
In 1947 the Government tried to nationalise these endowments as well as the buildings. I'm glad to say that the then Charity Commission showed its mettle and stopped this. I hope they will be as robust today at malicious and wrong headed attempts to make these charities account their money though the public sector hospital accounts. Andrew Hind must ensure this does not happen. These are the donations and endowments of generations of charitable giving, not for propping up the deficits of the State.
One of the glories of our remarkable sector is its glorious history and diversity. Some 500,000 organisations that form the weft and weave of our society. And like our society we are peopled with the magnificent and the wacky, the innovative and imprudent, the talented and the improbable.
So you can be sure that for every great advance we make there will be the sad chorus of the bemoaning few. So with the good news of the Social Investment Bank the predictable "this isn't good news" or "there is no evidence of demand" is trotted out. A shame those who argue there is no evidence don't actually bother to check. Though I must not be naïve; this is just a smart retort rather than an interest in facts.
So worth recounting the evidence of demand for the new Community Builders Investment Fund being run by the ACF which I chair. This is a £60m loan fund.
When it was set up there were 1432 enquires which have translated into 282 firm loan applications going through the process, worth up to £65m in loans.
And these are applications from community organisations - not the big national charities. The Adventure Capital fund and Futurebuilders and the DH Social enterprise investment fund have already demonstrated demand. But what I find so encouraging is that many great people in local communities have found they can fund their ambitions through loans as well as more traditional sources of funding. So let's support ambition shall we?
Clearly access to capital is new for our sector. These are new products and so it will take time before we are all comfortable with investment money as part of an organisations' diversity of funding. To suggest there is no evidence of demand is a flat earth approach. As with any new idea or product you will find people who don't want it and can't think why anyone else will.
Why, imagine the scene, a small rural pub some 70 years back, ale flowing from the casks, spittoons gleaming on the straw strewn floors. Two handsome folk on their bar tools:
Kevin (name plucked entirely at random). "Well I'm certainly not getting one of those new fangled big boxes"
Deborah (ditto) "No , nor me, I like my mahogany gramophone, why would I want an ugly TV".
Kevin, "exactly - no evidence of demand, it won't catch on... when your ready love, fill em up ...."
Just as we have climate deniers there are " loan deniers" too. 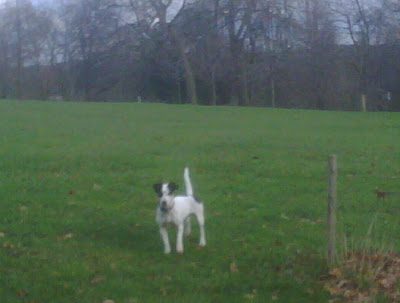 Good to have bracing Oxfordshire air to aid recovery. It was the quarterly Farmers Market in Charlbury on Saturday and my chance to stock up for Christmas with the gorgeous cheeses of the Cotswolds. I have a full round of the Churchill Cheddar from the marvellous Crudges cheese makers in Kingham and a Cotswold Blue Brie from the Simon Weaver Organic Dairy in Upper Slaughter. Now safety stored in a box in the shed on top of the Christmas Bollinger. It is a solecism to put good cheese in the fridge! And Sunday was dedicated to putting up and decorating the Tree and toasting the Advent Fairy with the first Bottle since the Op. I'm afraid the decorations look somewhat temporary as the Hound has decided what's hanging from the branches are toys for chewing. That poor Black Angel I brought back from Tanzania last Christmas is toast! 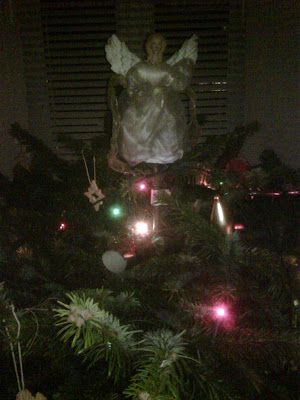 Bits of this are almost beyond parody. Almost. Hope you are making a swift recovery. Or indeed a Swiftian one.

thankyou Robin , and some great blogs recently...recovery halting but nothing keeps me from my blackberry!