Article in Times neatly sums up the problem of "Big Society".

"David Cameron's commitment to renew civic life is called into question by think tank and charity most closely associated with the project (Rosemary Bennett writes).

The Young Foundation says that Big Society is in danger of being reduced to slogan, with ministers failing to establish what the programme will entail and the public baffled by the few things seen so far. Geoff Mulgan, Director of the Foundation, said: "This autumn we need to see detailed plans of specific programmes, budgets and how the Government plans to measure its success. "

And the Young Foundation is a neat lead into a jury panel for "This is European Social Innovation" which is a competition to identify ten champions across Europe. It is a venture between the Young Foundation's SIX (their social innovation exchange) Euclid and the European Commission .

The EU Commission will be using them as case studies to demonstrate what social innovation looks like across Europe.

We held the jury by a "telepresence" conference at the CISCO headquarters in Finsbury Square, courtesy of SIX Chair, CISCO Director and generally cool guy Diogo Vasconselos.

The first time I have done a telepresence. It's very smart and meant we were talking to people in Madrid and Brussels and able to see them.

Here we can see the Brussels link; Peter Droell is the top EU official in charge of Innovation, working to Baroso. You can see his ethereal presence here: 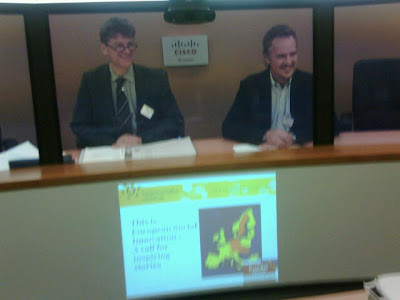 But now back to Cuts. Our ACEVO members are increasingly concerned about how cuts will affect communities unfairly.

Today 370 charity and social enterprise Chief Executives have written to Osborne and Alexander to remind them of the Coalition agreement to fairness. We have asked them both to take steps to ensure fairness in decisions on cuts. We have asked them to set up a "Fairness Panel" of this sector CEOs to review decisions to see if they are unfairly hitting the most vulnerable. See letter here.